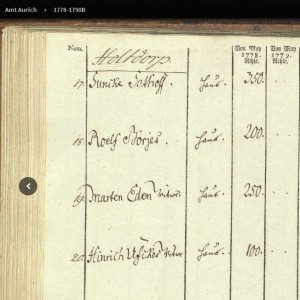 The entry for Hinrich Ufckes in the 1778-1790 Ostfriesian fire insurance books on Ancestry.com (“East Frisia, Germany, Fire Insurance Registration, 1768-1937“) makes a few good points about these records and research in general.

The names of places can change. The village of Holtrop where the Ufkes family lived was not always known by that name. Before Holtrop was used as the village name, Holtdorp was used. For this reason, Holtdorp is indicated as the location in the index Ancestry.com made to this record. Knowing the former name of the location was key to locating  Hinrich in the index and in the records.

It’s not actually Hinrich listed. The word “witwe” is listed after Hinrich’s name indicating it is his widow and not him actually referenced in this record. Sometimes those small words written after a name have meaning that is significant to our research.

Hinrich could have died in a range of dates. It is difficult to infer dates of death from these records because sometimes the word “witwe” was added to the record during the time period covered in the book. When the entry was first made the husband may have been alive and died sometime during the years covered in the entries for that specific book. In this case those years are 1778-1790. It appears based on a zoomed in look at the entry that the word “witwe” was written at the same time as Hinrich’s name was written. However there are entries where it is clear the word was written in sometime after the original name of the husband was written. In those cases, it is difficult to tell exactly when the notation was added. In those cases, it’s probably safest to say the husband died by the last year listed in the volume of interest.

Read other entries besides the one of interest. There’s no way to get a broad perspective on the records being used if only a very small number of entries are viewed. By looking at a variety of entries, one gets  a better perspective for what annotations are common and how entries are usually constructed.