Volke’s parents, Ulfert and Fredericka Behrens essentially raised her daughter, but it was not over when her father died. 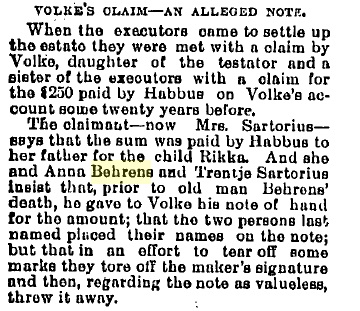 Upon the death of her father in 1889, Volke thought she was entitled to the $250 Habbe Habbus had given to her parents around the time their daughter Reka was born. Volke even insisted that her father had signed a note to her for that amount, indicating it was owed to her.

Volke and two others, Anna Behrens and Trientje Sartorius, insist that there was such a note. According to the newspaper, in an attempt to remove some “marks” from the note, Ulfert’s signature was removed from this note. This rendered the note useless.

The newspaper indicates that Ulfert gave $200 to the child Rika upon his death. The amount was actually $300 and an equal amount was given to his other granddaughter with the same first name. Ulfert’s 28 July 1889 will makes two additional cash bequests of $500–to daughters Volke and Trientje Sartorius.

Apparently the $500 was not quite enough for Volke.

After hearing the evidence, the jury received instructions from the judge. Those instructions provide a few additional historical lessons.

Separate from the lesson Volke learned.