There is nothing like a little family financial drama when a relative is on their deathbed. 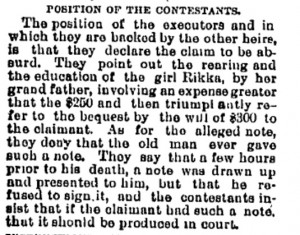 Volke could not produce the note she claimed her father signed. In an earlier post, it was seen that she claimed the note had been signed but that the signature had been torn off. The executors of her father’s estate doubted the existence of such a note and felt that the amount given her by her father in his will was sufficient. The executors admitted that a note was drawn up for Ulfert to sign, but that he refused to sign it.

It is always good when there is a little family financial drama while someone is on their deathbed.