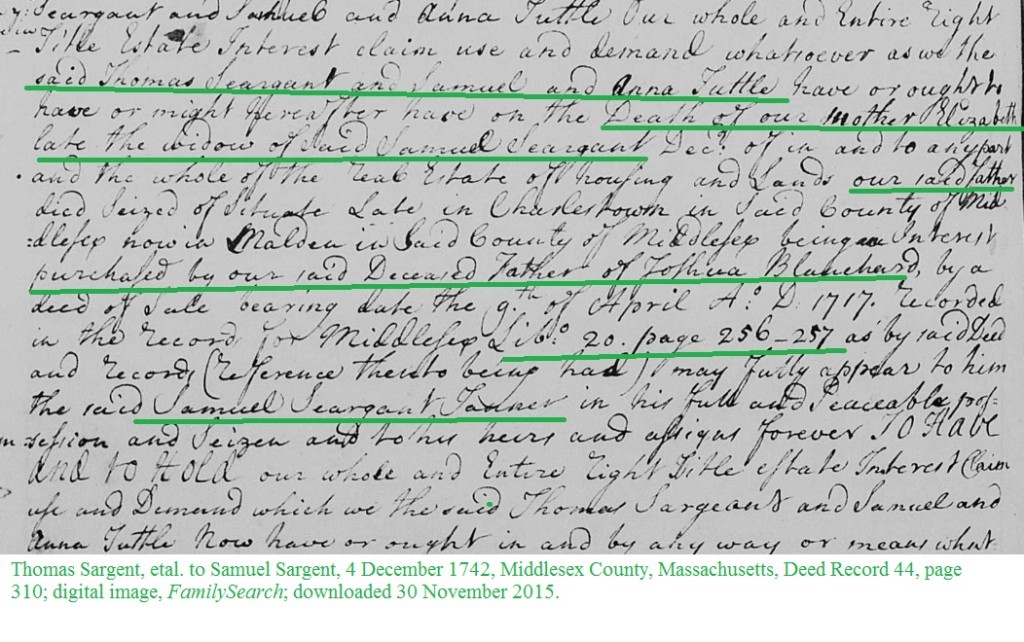 Inter-family deeds after a surviving parent dies can be one of the best sources of information. That certainly is the case with this 1742 deed from Middlesex County, Massachusetts. The deed clearly establishes the relationship between three of the children of Samuel and Elizabeth Sargent of Malden, Massachusetts.

The names Samuel and Thomas were common in the Sargent family. Samuel just appears to have been a common name in general. Fortunately the Sargent sons are identified by their residence and occupation:

. The image that accompanies this post refers to Elizabeth as being “late the widow of said Samuel Sargent.” That alone does not mean she was deceased at the time the document was executed. . [Note (1 December 2015): a more careful reading indicates that Elizabeth is not styled as “deceased” anywhere in the document].

In families where first and last name combinations are common being certain records refer to the same person can be problematic. In families where real estate was owned, metes and bounds descriptions can be used to compare properties referenced in different deeds to see if the same property is being referenced. This can be difficult if the deeds are decades apart and adjacent landowners have died or sold their property. Fortunately in this deed, the deed of purchase is not only referenced, but cited book and volume.

There’s a bit of evidence for the researcher and a solid connection between the earlier deed and the one from 1742.

This is one of the deeds we searched for in an earlier session of my “US Land Records” class. Consider joining us if you’ve not done so before.