This has been published before, but I’m reposting as it is just as timely as ever. 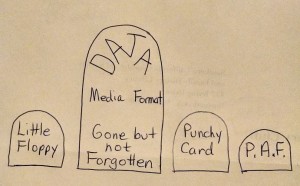 It’s 1968. Two genealogists are madly obtaining and compiling family history information. Ken is converting all his data to punch cards. “State-of-the-art” he says. Locals at the genealogical society brag about how “modern” Ken is. He’s been asked to discuss his technique with several groups. Martha insists on using her old manual, “it worked for Donald Lines Jacobus,” she states, ignoring the blank stare she gets in return. Ken jokes, “why Martha, you probably don’t have running water.” Martha calmly replies “I most certainly do…packing water from the creek would take away from time at the courthouse.”

Martha uses good paper and good ribbons, but that doesn’t matter to the others. “Living back in the ’30s,” they say. Martha remembers using court documents from the 1890s and the ease with which sixty years later she read the judge’s typewritten conclusions. She smiles to herself and carries on. After all, her research has shown she’s descended from a stubborn, independent lot and a little ribbing won’t sway Martha.

It’s 1998. Ken and Martha have been gone for years, the society members who lauded Ken and ribbed Martha are mostly gone, current members are largely unaware the two former members. Ken’s heirs and Martha’s too have found their genealogical compilations in their respective attics and have wisely donated them to the local genealogical society. The acquisitions chairman quickly appoints someone to inventory and catalog Martha’s typewritten charts, forms, and histories before they are added to the society’s collection.

The society is still trying to find someone to do the same with Ken’s cards. The comment “why don’t we sell them as bookmarks at our annual workshop” is initially laughed at but does generate some serious interest. Pictures are also a part of Ken and Martha’s collection. Martha’s black and whites have stood the test of time rather well. Some of the original stones are gone, but Martha’s pictures remain and will be archivally preserved by the society. Ken’s color photographs have faded and they, in addition to his punch cards, are still awaiting a decision.

While the “old way” of doing things is not necessarily the best way (I’m partial to running water and electricity myself), Ken and Martha’s story makes a point about the use of technology. The blond hair in the photograph of me at three years of age has faded. Today the photo makes me look as if I’ve always had a receding hairline. I have a stack of 5 1/4″ floppies sitting on my desk, gathering dust. They all contain state-of-the-art software, and corresponding data files. The only computer I have that reads 5 1/4″ floppies sits in my garage. With a null-modem I could transfer the files to the machine I currently use. That works today and the machine in the garage is thirteen years old. What about fifty years from now? If I had my “complete” genealogy on one of these disks could it be read and used in fifty years? What if the data is readable, but the software won’t run? Will someone have a working copy of the software?

If not, will there be any way to convert the data to a modern format? Even if they had a machine that could read the disks, what is the chance a machine of that age is in working order in fifty years? And what if it needs parts? It took the auto-body shop two weeks to find parts for my five-year old car. Obtaining parts for a fifty-year old computer is likely to be even more problematic. That does not matter, the technical ones say. There will be ways to convert any data format to any other data format at that point in time. Maybe, but maybe not.

If you take a look at 30-year old genealogical magazines, there are ads for various specialized record-keeping systems, with special charts, forms, and numbering schemes. For how many of these can you still buy forms? Heaven help you if Great-aunt Myrtle used one of these systems and misplaced the manual. And in the ever-changing world of technology, whose to say which data format or operating system will eventually win out? Ten years ago we lived in the world of MS-DOS and every computer user (except for Mac people!) had to enter in text commands in order to maneuver data and software files. Ten years ago, all genealogy software was written for DOS and windows had curtains. If Sun and others have their way, it will be curtains for Windows. Regardless of who comes out on top, change is the only thing that never changes.

In the rush to computerize and to digitize, it must be remembered that relatively speaking, these technologies are in their infancy and that file formats are still constantly changing. It’s also necessary to remember that computers and digital technologies originated as a means of communicating and processing information faster, not as a way to preserve information for hundreds of years. Electronic forms of publishing and data storage should not be abandoned. The days of paper and printing are not yet over. Remember the phrase “paperless office?” From what I see as I look at the clutter surrounding my desk, I realize we have a long way to go. In fact, computers make it easier to generate reports and forms.

Computers were never meant to be archival, they were a means to process information more quickly (at least in theory). And when a computer geek says they “archived” something they aren’t storing if forever. They made a backup copy in case their hard drive fails in the next few years. They are not planning on saving a copy for the next hundred years. The school where I work occasionally receives donations of old software. Software for Windows 3.1 is essentially useless, especially if we are preparing students for technologies they will encounter in the workplace. When my office was moved from one building to another, I threw out countless old software manuals and programs. We are not a software archives and there’s no practical reason to retain five and six year old software.

It’s important to remember that a significant amount of the fascination with this new technology is hype. It’s important to remember the word “hype” is related to the word “hyper.” A hyper person is usually too excited to be unable to focus and concentrate. Also remember that software and hardware companies benefit from new products being put on the market every six months and that “new” is not a synonym for “better” (my word processor confirmed this, just in case I was not aware of it myself). It should also be remembered that recent trends have made genealogists more of a market than they were five or so years ago.

Make no mistake. Information technology affords genealogists opportunities never before available. Significant amounts of data are available via computer and communication can be greatly facilitated. In fact, the editor of this e-zine and I have never met, never talked on the phone, never faxed, and never U.S. mailed. Also, on my end nearly half the articles never see a sheet of paper until the completed e-zine is e-mailed to me when it is “published.” Let’s also remember that the greatest information processor of all time is not archival. The human mind still has advantages over the computer. If we are really lucky, it lasts one hundred years and no one ever claims the brain should be used for long-term data storage. After all, I have enough trouble remembering where I put my keys fifteen minutes ago. Printed, typed, or written pages, once transcribed by a human, may last for much longer if preserved correctly. As we research, compile, and create, let’s not forget the lesson of Ken and Martha.