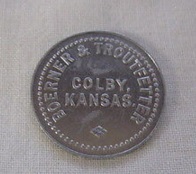 Front Side of Merchant Coin from Boerner and Troutfetter Store in Colby, Kansas.

Members of the far-flung Trautvetter/Troutfetter family have been known to make many things. Coins are one of those things that are on that list.

The Troutfetter store also had a 25 cent piece as well, but I decided another 50 cents in Troutfetter money was enough.

It’s not just paper items one finds on Ebay.