I’m reading A Nationality of Her Own: Women, Marriage, and the Law of Citizenship by Candice Lewis Bredbenner. It has often gotten me to thinking. After a brief discussion of the 1855 Naturalization Act, Bredbenner states on page 21:

“In the nineteenth century, naturalization could also furnish the means of inheriting property in the United States. As a noncitizen, an immigrant woman would have been barred by common law tradition from owning, transferring title to, or inheriting land in most states.”

It is important to remember that Bredbenner is speaking about women, particularly women who were not citizens. If women were “barred by common law tradition” from real property ownership rights, I wasn’t certain if it really was because they were women or because they were not citizens. For much of American history, women (citizens or not) were generally not afforded the same property rights as men. In some locations, during some time periods, aliens were restricted from engaging in certain transactions involving real property.

I thought about German native Barbara Bieger whose immigrant husband Peter Bieger died in the fall of 1855 in Warsaw, Illinois. It’s not clear whether Peter ever naturalized or not, but it is known that the Biegers married in Ohio in 1849. Peter bought property in 1850 in Warsaw, Hancock County, Illinois.

There are two questions:

We’re going to leave the first question to another blog post–because it’s the second one that came to mind after the quote in A Nationality of Her Own.

“Barred in most states”

The statement in Bredbenner’s book was general and uncited. It may actually have been true in general or it may not have been. Genealogy, like law, is about specifics.  It was time to look at the state statutes in effect when Peter Bieger died.

An 1851 Illinois law gave aliens the “same rights as citizens, in relation to the devise and inheritance of real estate.” There are also no limitations on whether or not aliens can purchase real property. This act was still in effect when the revised statutes were published in 1865–so it was in effect when Peter Bieger died. This does not address what may have been in effect in 1850 when Peter Bieger purchased his property. I need to reference that statute.

But Barbara could have been an alien and still have inherited the real estate from her husband when he died in 1855. Her inheritance of that property was not dependent upon her citizenship status. It is known that she operated the tavern on his property until at least 1859 (when she married Conrad Haase) and still retained title to the property upon her death in the early 1900s. 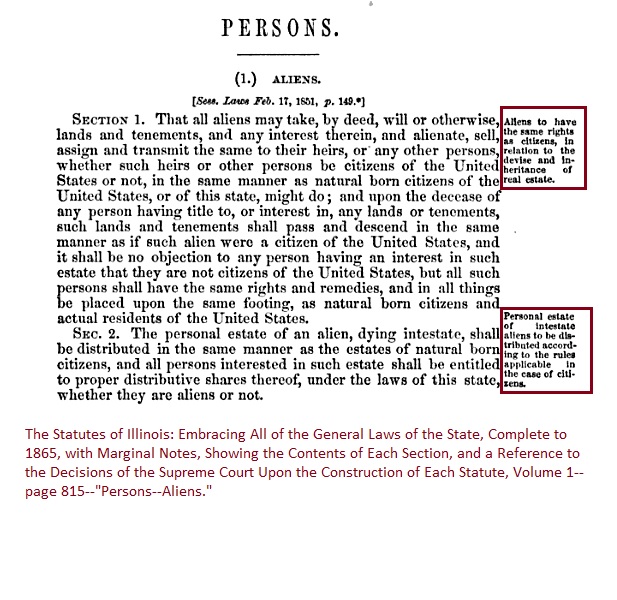