(c) 2014 Michael John Neill–this article originally appeared in the Ancestry Daily News and is used by the author on his blog with permission. 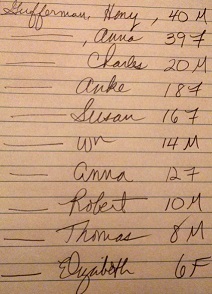 Anna Gufferman, who is twelve years old, sees a stranger approaching her small home. He looks reasonably dressed and does not appear to be carrying a weapon. Illinois is not as wild a place as Nebraska where her cousins live, but mother has warned her that one can never be too careful. She shoos her five younger siblings in the house as the man approaches.

He approaches the front yard and calls out for the man or the woman of the house and says he is here to ask questions for something called the “census.” Anna is wary of calling for her parents if there is no need. When Father and the boys are in the field, he does not like to be disturbed, not even if Grandfather comes. Mother is down at the creek by herself, having left Anna with the children. The weekly washing is one of the few times Mother does not have several small children underfoot, and Anna is hesitant to bother her if it is not absolutely necessary. Anna decides this “census” does not require her to disturb her parents. She tells the census taker that she is very familiar with the family and the goings on in the household. After all, she is twelve years old and responsible for several
younger siblings.

The census taker asks Anna several questions, which she frankly thinks are none of his business. He tells her that the government needs to know this information and that it is important it be accurate. Anna does the best she can to answer his questions. He starts by asking her the names of her parents and her siblings.

“It is a good thing my parents are not here,” Anna thinks to herself. While her English is rudimentary, it is considerably better than the handful of words her parents have managed to learn. Determined to impress the census man with her knowledge of English, she indicates that her parents are not Hinrich and Anneke Gufferman, but that they are rather Henry and Ann. Her other siblings all have names more German sounding than Anna’s. She decides to provide the census taker  with English versions of their names, just as she did with those of her parents.

Anna is not quite certain how old her parents and her siblings are, but the man seems to insist on knowing their age precisely. Their christening names and dates of birth would be in the family bible, but Mother would fly into an absolute rage if Anna got the bible herself and began leafing through it. Deciding it was not worth the risk of her mother catching her in the act, Anna guesses as to the age of her parents. Despite her uncertainty, she speaks clearly and distinctly to convince the census man that she knows the ages precisely. He seems pleased to get the information.

Anna decides to give hurried answers to the rest of the census man’s questions. He has taken time away from her chores and Mother will not be happy if the morning tasks are not done when she returns. Occasionally impatient with Anna’s delayed answers, the census man seems pleased when Anna begins answering the questions more quickly. Eager to please and knowing she should return to her chores, Anna speedily answers the remaining questions, paying little concern to the accuracy of her answers.

The census taker arrives at the home of Hinrich and Anneke Gufferman.It is a different place than his fellow enumerator encountered in 1860. Hinrich and Anneke have two children at home, the youngest son who helps his father farm and a daughter who works as a hired girl for a Swedish couple up the road. There is still plenty of work for Anneke to perform around the house, but no longer meeting the needs of twelve children makes her life less harried than it was before.

There are additional questions and Anneke provides the answers as best she can. In Germany, her husband was a day laborer and had moved several times looking for work. When asked where her husband’s parents were born she is not certain; Hinrich’s mother died when he was a baby and the father had died shortly after their marriage. Anneke told him the parents were born in Germany. Anneke was not
certain of her father’s place of birth, either. He had died before her birth and had been a soldier. Anneke had been named for her father’s mother, with a first name that was unusual for the area of Germany where she was from. Thinking her father was Dutch, she told the census taker that her father was born in Holland. But she was not really certain.

The census taker comes to the door of Hinrich Gufferman. It has been a month since his beloved Anneke has died. Hinrich does not know the census taker. He swears at him in German in a booming voice and the enumerator senses that he will get no answers. Gufferman’s son Johann lives a few miles up the road, fortunately in the same township. The son had told the census taker that Hinrich was taking the death very badly and was only speaking to a few family members. Johann told the census taker to come back if information was needed on the father. It looked like the enumerator would have to take Johann up on his offer.

Ever wondered why some census entries look like creative accounting? Have you ever thought about what actually transpired when the census taker arrived at your ancestor’s home?

(c) 2014 Michael John Neill–this article originally appeared in the Ancestry Daily News and is used by the author on his blog with permission. Any other reproduction or publication is not permitted.