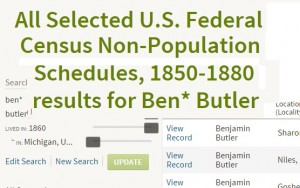 Readers of this blog are well aware of my difficulties in locating Benjamin Butler in several records, particularly the 1860 census. He’s been found in others:

Searches for Benjamin (using a variety of birth years, birth places, name variants, and location variants) in 1860 census indexes have been unsuccessful and will not be repeated in this post. Manual searches at this point have not been conducted, because there is good chance he was living in either:

Then I remembered that there was one 1860 census I had not searched: the non-population schedules, particularly the agricultural one. Benjamin was not a manufacturer, but was a farmer in 1850 and 1880 and possibly one in 1860 as well. Using these schedules to find Benjamin is a good idea, with the following things kept in mind:

I have a list of Benjamin Bulters that I’ve located and eliminated as being mine. Keeping track of these “not-my-Benjamins,” along with the perceived reason for not being mine is an integral part of my research process. My hope is that the agricultural census index will locate a Benjamin Butler that I have not already seen in the 1860 census enumeration in one of the likely areas where Benjamin lived. I can then use that enumeration (and the specific location for this “farmer Benjamin”) to find this Benjamin Butler in the concomitant population schedule. The hope is that there is a Benjamin Butler in the population schedule whose enumeration is difficult to read but that whose agricultural schedule entry is legible.

No guarantees, but worth a try–as long as I keep the limitations of this approach in the forefront of my mind.