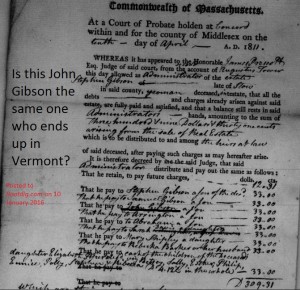 And it’s not like there is just one John Gibson living in the area during this time period. John’s a relatively ubiquitous name and Gibson isn’t all that unusual either. I’m going to need more than a first and last name combination to confirm that this John Gibson is another man of the same name in another location.

This may be a situation where it is necessary to track all the heirs of Samuel Gibson to determine where the others lived and see if there was a John nearby.  That would be a good approach, but it’s a little time and research intense. Not that I am opposed to that, but there may be another way to track this John.

And it is always possible that the John mentioned in the estate of Stephen Gibson did not settle near any of his own relatives. He could have struck out entirely on his own or lived near where his wife’s family had migrated.

Because there may be more than one John Gibson.

Just like there’s more than one way to access his probate file. The images in this post were obtained from the microfilmed copy of Middlesex County, Massachusetts, probate files. The packet in question was for Stephen Gibson whose probate was contained in packet 9115 and was initiated in 1807. The digital image was made in May of 2015. The date of the digital image is not necessary for my citation. The first image in this post was from an estate disbursement accounting in that packet dated 10 April 1811.

That’s not quite in the style of EvidenceExplained, but it gets the essence of what’s needed.