My maternal grandfather would have been 99 years old today. 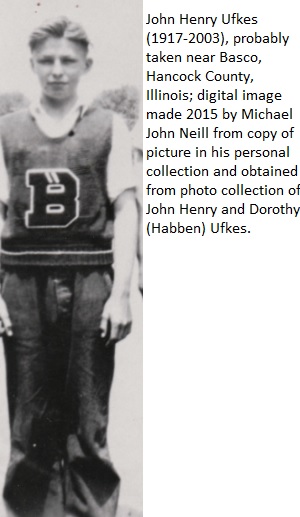 Granddad was born 27 January 1917 a few miles east of Basco, Hancock County, Illinois, the son of Fred /Frederich and Tena/Trientje (Janssen) Ufkes. He was the only grandfather I ever knew as my paternal grandfather died when I was a baby. My grandparents came to just about anything I ever did in school. I can remember numerous times going out for pizza after a school concert or similar event.

Granddad could speak low-German, at least a little. I don’t remember hearing him speak it often and unfortunately can only remember “Moin!” I was always told that it was all he spoke until he turned five or six and went to school, but I in hindsight I find it hard to imagine that his parents didn’t speak English some at home as both of them were born and raised in the same area he was. He didn’t speak low-German very often and, while it is something of an understatement, it always sounded foreign to me when he did speak it.

I can remember Granddad smoking a pipe until I was in the fifth grade and he had his heart attack. When he came home Grandma had cleaned all the smoking materials out of the house and we never spoke of it again. I’ve been tempted several times to get some smoking tobacco and sprinkle it over his grave–and maybe just a little bit on Grandma’s out of oneriness.

Granddad farmed all his life, renting a farm near Ferris, Illinois, until sometime in the 1950s when he moved back to his parents’ farm near Basco, Illinois.  The cattle were Hereford and the tractors were Allis-Chalmers. Mom and my brother and I would go to see my grandparents every Saturday when I was young. At some point the visits turned to every other week. Grandad would always have a bag of Smarties candies and would give us a few before we went home.

And tea. We always had tea at Granddad and Grandma’s. Always. We had tea when we would go to see my great-grandmother Ufkes who lived in town(Grandad’s mother). Always tea. It was a tremendous deal when I was considered old enough to drink tea with no milk. But there was always sugar. Hot tea needed sugar.

Once in school for reasons that now elude me we had to discuss our middle names. When I mentioned mine was John, the teacher acted like it was some common pedestrian name. I must have shot her a look that indicated she without hesitation she should drop dead. My name came from Granddad, who got it from his Grandfather Ufkes and it has been passed down through the family since the beginning of time (or at least with documentation since 1687).

Granddad died in 2003. He’s buried in the Immanual Lutheran Cemetery near Basco–the same cemetery where his parents and grandparents are buried. His two infant children are buried in an adjacent plot.

May he rest in peace.

Note: In writing this post, I realized that it is beyond time for me to write up my own personal memories of people. My own recollections of some things are starting to fade.