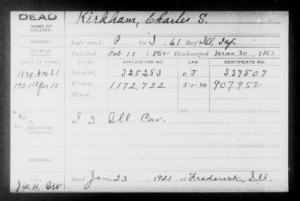 A little preliminary work on Reka Behrens (daughter of Volke (Behrens) Sartorius), indicated that Reka’s  second husband, Charles S. Kirkham, was a Union Civil War veteran. Given that Reka was born in the early 1870s, I had not thought immediately that one of her husbands could have been a Civil War veteran.

That was my oversight.

And it’s a good thing he was because that means there could be some mention of her precise age or date of birth.

There are not civil birth records in Illinois when Reka was born and I’ve been unable to locate church records for her baptism. Her precise date of birth is not known at this time, partially due to the time period and partially because her birth parents were not married when she was born.

We’ll have to see what the pension file has to say. Her date of birth really probably is not germane to her pension claim. After all, that claim is more concerned about:

Whether she was born in 1869, 1870, 1871, or 1872 isn’t really the concern of the pension department. Unfortunately it is of concern to me. However it is difficult to tell what type of testimony may be in the file, so it’s always worth a look.

And it never hurts to consider the possibility that anyone can marry a Civil War veteran.

Even someone born in the early 1870s.