For a change of pace, I decided to revisit Alfred Butler, the Mendon, St. Joseph County, Michigan, resident who served in the Civil War and died there in 1895.

Alfred is a son of Benjamin Butler, who died in the 1880s in Vernon County, Missouri. I’m not really certain why Alfred stayed behind in Michigan when his family left for Iowa and Missouri, but he did. It is possible that he returned to Michigan in order to enlist in the war. Benjamin and his family cannot be located in the 1860 census, so it’s very possible.

I knew Alfred served in the Civil War from St. Joseph County, Michigan, and I decided to see if there was a pension for him. My hope is that his pension record provides some clue about where he was born or his family of origin. The chance is small as all the veteran really had to do was prove service and need. But it’s still worth a shot. The organizational unit index card at Fold3.com contained a reference to the Alfred Butler of interest. 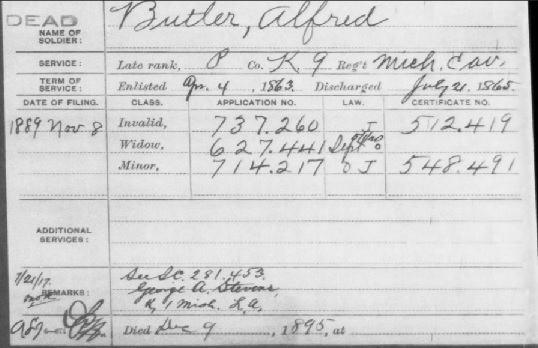 The card for Butler indicated a reference to the card of George A. Stevens. Stevens card was located in the same database created from NARA publication T289 at Fold3.com. It cross referenced the Butler card and provided a date of death for Stevens.

I decided to check the FamilySearch database “United States Remarried Widows Index to Pension Applications, 1887-1942” (created from NARA microfilm publications M1784 and M1785). A search for Alfred Butler located a “remarried widow” card for Sarah C. Stevens.” That explained the references on Butler’s and Stevens’ cards to each other. Sarah was married to two Civil War veterans. 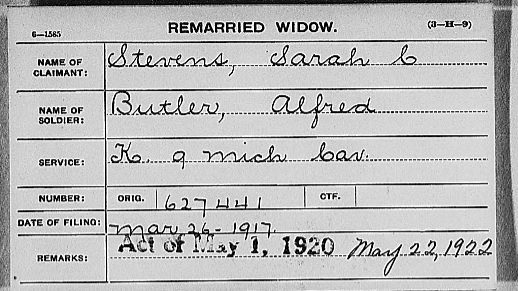 Here is where it is good to “call for the question,” as they say. Obtaining these pension files may not be cheap and my goal is information on Alfred Butler, because he is a son of Benjamin Butler, who is my real focus. I may not need all the information from the widow’s pension and the children’s pension (the card index for Alfred Butler indicates that at least some of his children were given pensions based upon his service).

This may be a time to have a researcher look at all the records involved in these two pensions, letting them know about my goal. Whether I do that will depend upon how much it costs to get these pensions.