The “Where Were They in 1880” blog post got me to thinking about how all the unmarried and unborn people eventually made their way down to me. It sounded like an excellent thing to write a blog post about. Like the best of blogging ideas, it made me realize exactly how much I did not immediately know. 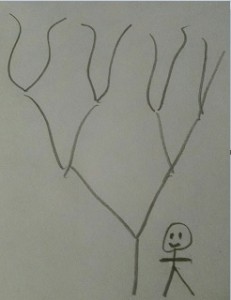 I have ten sets of ancestors (including my parents) who were not married in 1880. Some were not married because they were not born. That’s a difficult thing to do unless one is searching for families on an Ancestry.com tree. That’s nine “meetings” and relationships that took place before I came into existence.  Thinking about those relationships and how those people met was a good genealogical exercise.

Note: All locations are in Hancock County, Illinois, unless otherwise indicated. Constantly including that in phrase in every location gets a little cumbersome. My ahnenlist can be viewed here.

In 1880, my great-great-grandfather Jans Janssen immigrated to the United States from Wiesens, Ostfriesland, Germany. He is known to have settled near Basco, Hancock County, Illinois, as that is where two of his mother’s siblings had already established. It is believed that Jans worked as a hired man for one of his uncles. He and Fredericka Sartorius were married in nearby Adams County, Illinois, in 1888. Fredericka’s family was Adams County, Illinois from the 1860s and on, but there is evidence her family attended the same Lutheran church Jan’s relatives did around the time the the Janssen’s married. It is possible that is how they met.

Jann Mimken Habben and Anke Hinrichs Fecht were immigrants to Prairie Township from Wiesens, Ostfriesland, Germany, arriving with their parents in the 1860s. They were actually step-siblings as his widowed mother married her widower father in 1877. Jann and Anke married in 1881. It’s fairly clear how they met as they were living in the same household.

I’m not precisely certain how Focke Goldenstein met Anna Dirks before their 1881 marriage in Coatsburg, Adams County, Illinois. Focke was an Ostfriesen immigrant living near Golden in Adams County, working as a hired man. Anna was living with her parents near Coatsburg. Anna was the daughter of Ostfriesen immigrants and they probably met as members of the same general social community.

In 1880, my great-grandfather George Trautvetter was living with his father on his father’s farm near Tioga, in Walker Township. Sometime after the 1880 enumeration my not-yet-a-teenager great-grandmother’s mother “is no longer around” and her father leaves Warsaw, living in southwestern Hancock and northwestern Adam Counties. Great-grandma spent time with foster parents after that. The couple who took her in lived in Walker Township. To date there is no known relationship between great-grandma and her foster parents. My great-grandparents were married in 1898 by the minister of the Tioga church.

Frederich Ufkes and Trientje Janssen were married the minister of the Lutheran church in Basco in 1916. Their father’s farms were both located within a few miles of each other in Harmony Township. They attended the same church and were members of the same ethnic group. It is easy to see how they met.

Mimka Habben and Tjode Goldenstein were married by the pastor of the Zion Evangelical Lutheran Church in Carthage in December of 1907. Born in Nebraska, Tjode’s parents had moved to a farm near Basco in the late 1880s. They moved to a farm near Golden, Illinois, by the time Tjode married. Grown by the time her parents married Tjode stayed in nearby Carthage, working as a “hired girl” for the Mack family. Members of the same ethnic group (both were children of Ostfriesen immigrants), they may also have met at the Zion Evangelical Church as it’s known Habben’s family attended the church.

Cecil Neill and Ida Trautvetter married in 1935, travelling to Keithsburg, Mercer County, Illinois, to elope. They had lived fairly near to each other while they were children in Walker Township. By the time they married, Grandma Ida was living with her parents on a farm north of Loraine in nearby Adams County.

John Ufkes and Dorothy Habben, as the story goes, met at Luther League at Trinity Lutheran Church in Carthage where their families were both members. The Ufkes family transferred to the “town church” from the Basco church in the 1920s after John’s grandfather died. The Habben family transferred from the Zion Lutheran Church after the congregation disbanded after the start of World War I.