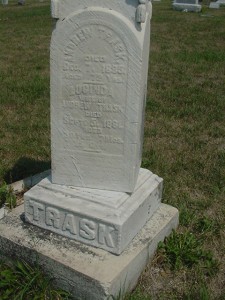 Occasionally it’s good to turn one’s attention to individuals that have not been looked at in some time. It’s been over ten years since I did any serious work on Andrew Trask. Andrew and his wife Lucinda are not the far away from me. This ancestor of my children is buried in the Norwood Presbyterian Church Cemetery (Mercer County), near Alexis, Warren County, Illinois–approximately thirteen miles from my home.

A quick summary on Andrew Trask:

Andrew lived briefly in St. Louis, Missouri, where he married Ellen Weld (the biography says 1845 but it was actually 1843). He purchased public land in Clinton County, Illinois, while still living in St. Louis. This is where he later married his second wife. He sells his Clinton County property and purchases publicly owned land in Mercer County, Illinois, where he spent the remainder of his life.

Trasks’ biography gives a quick overview of his life. How accurate each detail is one can’t immediately say. It is known that the year of marriage to Ellen Weld is off by two years. It is very possible that the original biography of Trask was handwritten and the “3” looked like a “5.” Or it’s possible that Trask did not remember the year correctly. 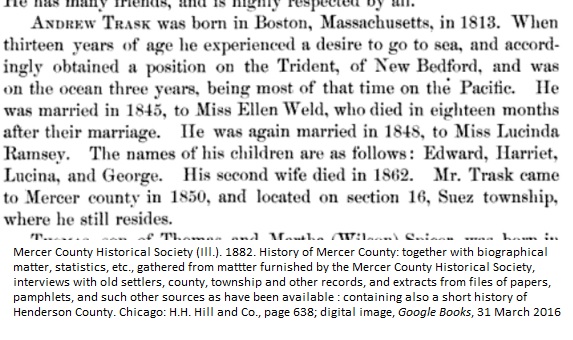 There are no Trask families living new Andrew in Mercer or Clinton Counties. So those clues are not available.  There is a Trask family in St. Louis, but their connection to Andrew cannot be determined. It is not known exactly what brought Andrew to St. Louis, but if he was working on a ship, it is possible that the Mississippi River played a role in his travels.

As somewhat of an admitted long shot, we’re obtaining the Civil War pension of Andrew’s son-in-law, Charles Hartzell, who served in an Illinois unit and died in Pratt County, Kansas. It’s possible (but not overly likely) that it mentions Hartzell’s in-laws, but there is only one way to find out and that is to obtain the pension from the National Archives.

. Charles was married, but his widow predeceased him which is why there is no widow’s pension referenced on this card. 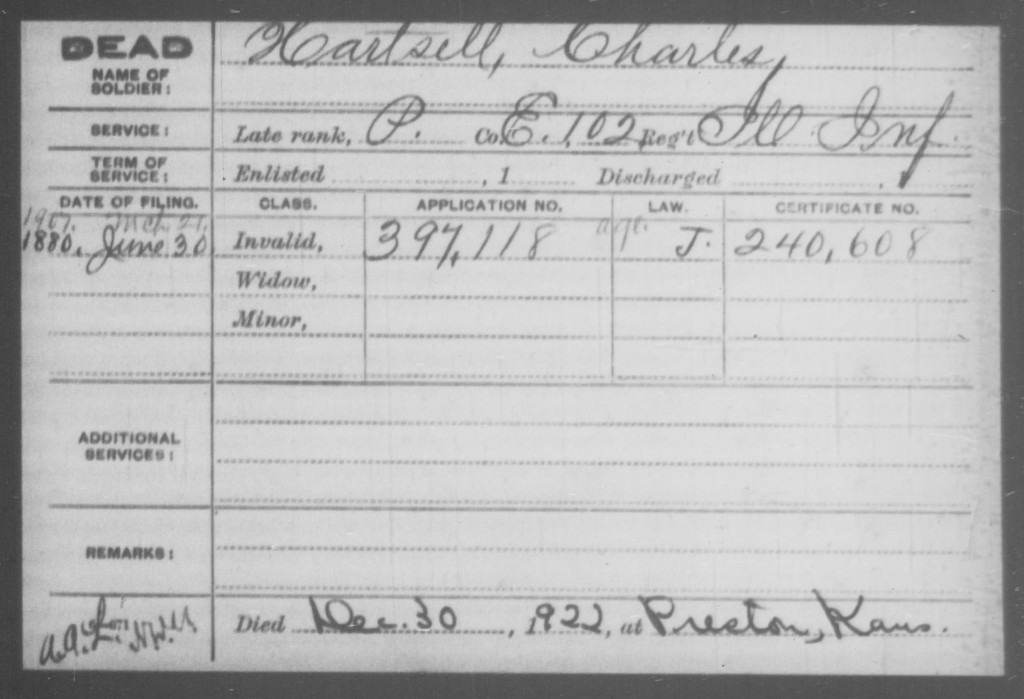 Stay tuned–we’ll have an update when we’ve got more.