Politics are keeping me from getting my pension increase.

This letter in the Civil War pension file of Charles Hartsell originally caught my attention because it mentioned Hartsell’s Democratic leanings as the reason for his delay in receiving his pension increase. But as I read the letter, I realized there may be a clue beyond the claim that the veteran never “had a Squar[sic] deal under the Republican Administration.”

In one other affidavit Hartsell indicated that he had lived in Union County, Iowa, until 1901 when he moved to Kansas. That 1907 affidavit was made out in Kansas. Hartsell died in Pratt County, Kansas, in 1922 where he was buried. Just because Hartsell was in Kansas in 1907 and in 1922 does not mean he was there during the entire interim.

I need to make a more detailed review of th 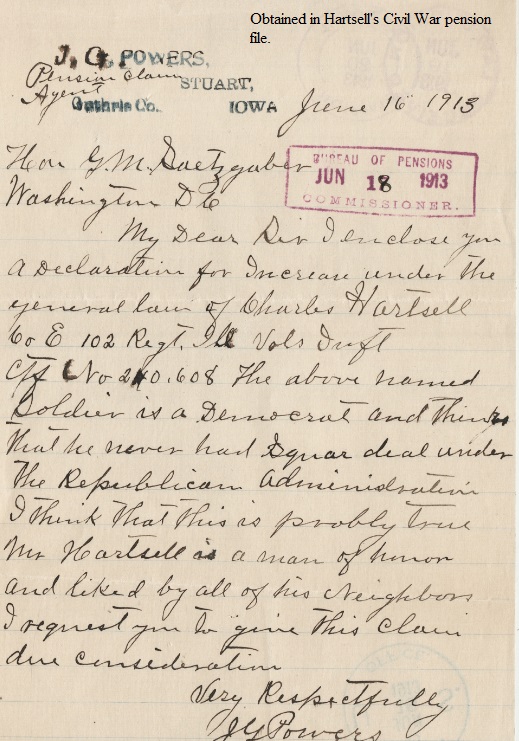 e pension documents in Hartsell’s file in order to develop the residential chronology more fully. There may be other materials during the 1901-1922 era that may also reference Iowa locations.

And those documents are likely lengthy, tedious medical reports. There were quite a few of those in Hartsell’s pension file.

Those documents that seem rather mundane and “non-informative” (particularly all the medical and surgical reports) may contain residential clues. I need to take a look at them.

The politicians may or may not have been to blame for Hartsell’s pension problems. I only have myself to blame if I don’t analyze all the documents in his pension file completely.