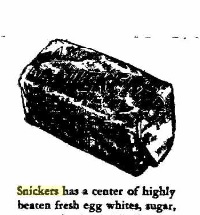 I’d heard the story so many times that I could probably repeat it back to Grandma although I would never dream of actually doing it. “Dad” without fail always referred to my Grandpa Neill when uttered by Grandma. If she did refer to him by his given name, it was never when speaking directly to me. He was always Dad, even when mentioning him to my father or my uncle or just about every other family member. Even if it involved him rolling over in his grave, he was still “Dad.”

I have no memory of my Grandpa Neill; he died when I was six months old. He was always Grandpa Neill. Never “Grandfather”or any truncated diminutive. He was certainly never “Granddad” as that term was reserved for maternal grandfather. Different terms reduced confusion.

I was never confused by my Grandmother referring to my Grandpa as Dad. That made perfect sense.

When Dad and I got married, we were dirt poor. We went to Keithsburg and got married and after we got married we split a bottle of pop and a Snickers bar. That was all we could afford and that was our celebration. 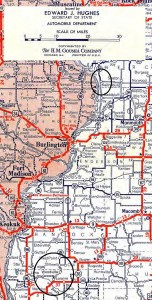 1935 State of Illinois Highway Map obtained on 5 April 2016 at http://www.idaillinois.org/

Grandma, why did you go to Keithsburg to get married?

Your Grandpa took a notion and that’s where we went.

I knew better than to argue, but from what I did know of my Grandpa, he didn’t do things on a “notion.” I still don’t know why they went to Keithsburg.

There was always a Snickers bar in the story. Always. The beverage was always an unbranded bottle of pop, never soda. Always pop.

That night we went to Roseville where Uncle Ralph lived and were chiavaried.

I never asked Grandma how to spell “chiavaried.”

That was the end of Grandma’s story about her marriage to Grandpa. My notion that they wanted to keep their marriage a secret was shattered when I located an item in the Mendon Dispatch in December of 1935. The Trautvetter-Neill nuptials were announced for all of northern Adams County, Illinois, to see. 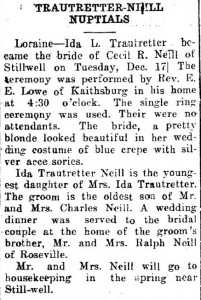 Putting your wedding announcement in the local newspaper with details about the ceremony certainly does not qualify as “keeping it quiet.” The chiavari at Uncle Ralph’s was written up as a “wedding dinner.” Given how the newspaper spelled other words, it’s possible that they simply did not know how to spell it.

We both went home to live until we could set up housekeeping in the spring.

Grandma never told me they rented a farm near Stillwell when they were first married. That was never in her version of the story. She only mentioned living on a rental farm near Plymouth owned by one of Grandpa’s relatives.  Considering how well the newspaper spelled Trautvetter, Keithsburg, and Neill, it’s possible they got the location mixed up.

The part about Grandma being a pretty blond?

I’m betting they got that right.