It is not often one gets direct, in-your-face evidence of a name variation. Usually one has to use other clues to confirm that references to individuals with slightly different names are, in fact, the same person.

That’s not the case with this envelope in the pension file of Charles Hartsell who saw Civil War service in Company E of the 102nd Illinois Infantry.

The name Chas Harkill is crossed out and Charles Hartsell is written above it.

Is the name really a variant or did the clerk get “off” copying the information from some alphabetized list of names? We’ll never know, but it is easy to see how the last names could get mixed up o confused.

Sometimes a record full of seemingly innocuous information (Hartsell’s file is full of medical minutia) can contain small clues that are larger than they originally appear. A name spelled incorrectly or an address that was only valid for a short time are clues that can be hidden in files that appear to be chock full of banalities.

And the color copies? That helped to determine that the ink was different. That wouldn’t be the case if I had black and white copies. 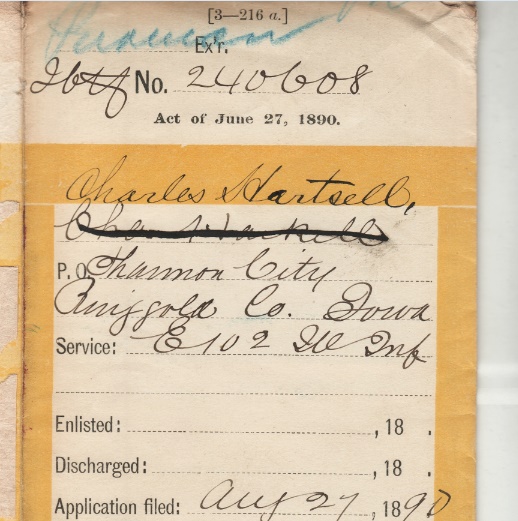