This was originally posted on 14 April 2012 and has been slightly edited.

[This is a slight diversion from our usual topics on Rootdig, but there is a genealogy slant.]

My paternal grandmother began baby sitting me when I was a few months old and my mother returned to work in August of 1968.  A  regular ritual (until I went to school myself) was my Dad and my uncle coming into the house every noon for dinner.  When I was about maybe three or four years of age, my uncle teased me and told me that if I misbehaved Grandma would use “that old butter paddle of Grandma Trautvetter’s and spank me with it.” He also told me that if I didn’t want to get spanked that I should put the butter paddle in the kitchen garbage can and then I’d never get spanking. That seemed to be a pretty sound conclusion to make. 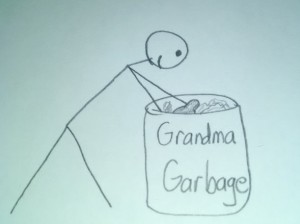 I couldn’t get spanked if there was no butter paddle.

So later that day while Grandma was outside doing something, I set about to avoid spankings the easy way. I put that butter paddle in the trash can, sliding it under other garbage so Grandma wouldn’t see it.

I know she didn’t.

I forget how Grandma came to find out about the butter paddle. I guess I eventually told my Dad or Grandma. My uncle may even have mentioned that he teased me about it. That part I don’t remember.

I don’t think I got punished for it. But my uncle never suggested anything of the sort again. I have a vague memory of Grandma talking to him about it, but I’m not certain of that either.

What I do know is that I got rid of the butter paddle of my great-grandma Trautvetter.

And so at the age of five, I destroyed my first family history artifact.