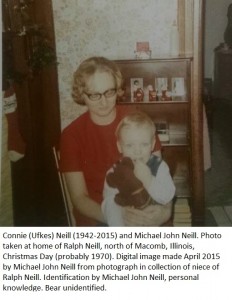 I’ve used this photograph as an illustration for blog posts before, but I’ve altered my caption and hopefully improved it.

While I understand metadata and how that can be incorporated into a digital image, I’m a firm believer in including that information on the actual photograph itself. Images get “copied and pasted” into other graphics programs, file transfers don’t work correctly; and some people have no idea what metadata is, let alone how to find it. Putting identifying information on the actual image itself facilitates use of the photograph by others who may come across it.

In this undated picture, I’ve identified the individuals from personal knowledge, included the approximate date of the photograph, mentioned where it was taken, indicated when the digital image was made, and mentioned who has the original photograph. In this version, I have left out the name of the current owner of the photograph. Well it really hasn’t been left out. Anyone familiar with the family would know that in 2015 Ralph Neill only had one living niece, so the person has essentially been identified.

There’s no discussion of “how” I know who is in the picture or where it was taken. Identifying my mother and myself should be self-explanatory. How I know it was my Uncle Ralph’s home is probably too long to include in the photograph, but the fact that we celebrated family Christmases there until I was about five or six years old would certainly be something worth writing up in my research notes.

If the identification was made by someone else or handwriting on the back, then I should include that. The image of the handwriting would be something good to include along with the text that I have added.

It is frustrating to see a digital image of a photograph on a website or in an online tree with nary an iota of a clue as to how the “publisher” of the photo came to find it. I don’t expect a detailed chronology of where the picture has been every year since it has been taken. But it would be nice to know if the photograph was found in a collection of family photos owned by a descendant of the individuals pictured, was found in a scrapbook purchased at an auction, etc. If the person in the picture is someone of whom I already have pictures, then I have a comparison.

But if I have no other pictures of the person identified and then one “appears” online in digital format sans provenance, I am left wondering:

how do they know it is who they say it is?

The original submitter did not answer my inquiry about the picture. I made it clear that I didn’t want the original. I simply wondered (in a tactful and polite email) where the picture came from because I had never seen one before and I was very glad that the submitter had shared it. I was just curious where she had located it. I offered to share with her additional information I had on the family that was not in her online tree.

My concern is that the lack of a response is telling.

If you don’t know how to add these images to your own digital images, it’s one of the two topics discussed in my recent webinar on “Citing Digital Images and Creating Colorful Pedigree Charts,” which can be downloaded immediately for only $5.50.