Looking at everything takes time and is not always practical, but it often brings about unexpected results.

I’ve known for years that William S. Newman purchased via a cash sale 40 acres of property in Tipton County, Indiana. Newman probably did not actually live on the property and sold it a few years after he purchased it in 1849 for $2 an acre. His brother-in-law, William Tinsley, also purchased 40 acres on the same date. He did not move to Tipton County either and the purchase of this federal land appears speculative in nature.

The patent styles William as being of Rush County, Indiana, which is where he married in 1839 and where he is enumerated in the 1850 census. Newman purchased the northeast quarter of the northwest quarter of section 29 in Township 22N Range 5 East. 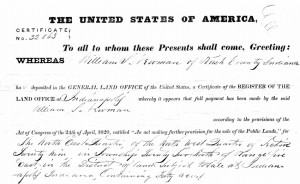 I obtained a copy of the cash sale land file from the National Archives for William Newman several years ago and, as expected, all the file contained were a few receipts. Obtaining the file was more out of curiosity than anything else as cash land sale files typically consist of a few receipts and that is about it.

Frankly, I never bothered to look at the actual tract books from the Bureau of Land Management either as the whole thing seemed pretty cut and dried.

Dry turns out to be a good word to use in this case.

Today I looked at the tract book for section 29, and to my surprise there was another entry for William S. Newman, indicating a purchase date of January 14, 1851. Initially I thought it was odd and William only shows in the BLM patent site as getting one patent in that section. The BLM patent database only indexes patents–those deeds that transfer land from federal to private ownership. 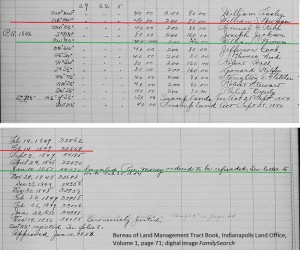 There is another entry for this same piece of property at the end of all the other entries for the section where it indicates “Swampland Act Sept. 28 1850. Approved Jan. 10, 1856.”

William did not actually get the second piece of property. Since there was no patent, there was no second entry for him in the BLM database of patents.

I may have to get that second file–cancelled cash land sale files should be at the National Archives.

How much it tells me about William S. Newman is debatable, but now I’m curious.

It never hurts to look at everything because what you think is cut and dried may turn out to be something else. Perhaps even swampy.

You can order my hour-long presentation on searching the BLM website and using the BLM tract books for $9. Handouts included and download is immediate.