Researchers should always note if the record they are using appears to be a handwritten copy of the actual record. Some record books, when they began to start falling apart, were handcopied by clerks in order to preserve them.  It is easy to see how this could happen in the days before other duplication techniques were developed.
When analyzing documents, one should question whether the information in the document being used appears to have been written contemporaneously in the normal course of doing business or whether the source being used contains information that was later copied from a contemporaneous record.

While any record can contain errors, copied records have the additional potential for errors that comes from being a transcription of an earlier document.

In some cases our ability to determine if a record is a later transcription of an earlier record copy is hindered by our use of a black and white microfilm copy of the original record. Black and white copies can hide variations in ink color.

Sometimes one looks at an item and wonders if it was copied from an earlier record or index after the fact.

Such is the case with this page from the Bureau of Land Management’s Tract Book from the Indianapolis, Indiana, land office (volume 1).

Initially looking at it, the handwriting appears fairly consistent for entries covering several years. The ink looks too consistent. A color copy or a look at the actual book may answer the question of “how consistent” the entries are. It can be easier to determine that sometimes from a good color reproduction or in looking at the actual record. 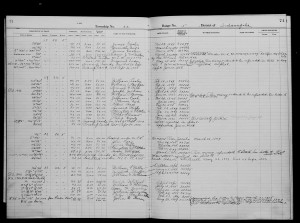 In this case, the index took me to the desired materials and was not “used” or cited itself, so how it was created was not a problem. But if I had cited something in this record (an annotation perhaps) or had been unable to find a desired index entry, then an analysis of how the content likely entered the book would be more crucial.