“Daddy hated chicken because he ate so much of it when he was a kid.”

I had almost forgotten Mom mentioning Granddad Ufkes’ dislike for chicken until I read several 1920-era references to his parents in the Hancock County [Illinois] Farm Bureau Bulletin in GoogleBooks. Granddad’s parents, Fred and Tena Ufkes, have several notices where they are selling chickens, eggs, or egg-raising equipment.

Born in 1917, Granddad would have been a young child at the time some of these ads appeared. By the mid-1920s, he was probably old enough to be tired of eating chicken.

Illinois farmers raising chickens in Illinois in the 1920s was a common practice, even if the eggs were not always sold in large quantities. The discovery was not a newsflash to me, but the items were interesting to locate.

This journal, and others that are also occupational in nature,  might not always provide grand revelations, but they could document a person’s residence in a specific location at a certain point in time or indicate that a person was still actively engaged in the occupation at a specific time. Whether facts located in materials of this type are germane or provide significant clues simply depends upon the problem. At the very least they often provide a little background, even if there’s not a family story that can be intertwined with the references.

And like always, there’s a few lessons to be learned in these items that are bigger than a few chicks and eight-month old pullets

Women may be mentioned in publications in such a way that their name is never used–great-grandma is styled as “Mrs. Fred Ufkes.”  I did not see a reference to her as Tena Ufkes and most references to females in the Bulletin were as “Mrs. Husband’s Name.” 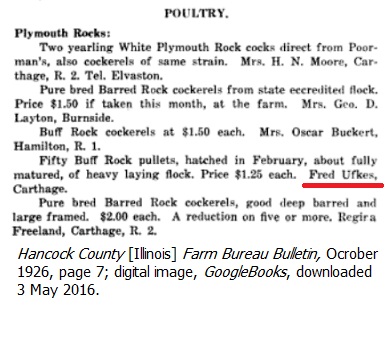 I also should determine just how complete the run of Bulletins is on GoogleBooks if I need to search them in a systematic fashion. I suspect the series has not been completely digitized. Determining who has the originals may assist me in locating additional copies. Print materials that are scanned by GoogleBooks often are stamped by the original facility holding the materials. In some cases a mailing address may still remain on the item. These can both be clues in determining where additional materials may be located. A search on WorldCat is also suggested.

Three of my sets of great-grandparents were living and farming in Hancock County, Illinois, during the 1920s when these newsletters were published. The Ufkeses are the only ones who are mentioned.

The story was that my great-grandfather Habben could not stand two things: the Farm Bureau and a United States president that I won’t name here. His name not appearing in these magazines does not surprise me. However, since I don’t have any passed down information about how my great-grandfather felt about the Farm Bureau, there’s no real way I can draw a similar conclusion about how he felt about Farm Bureau. There’s a variety of other reasons why his name isn’t mentioned.

Sometimes one can’t draw any conclusions from a person’s omission from a source. 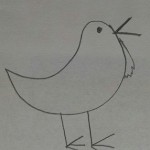