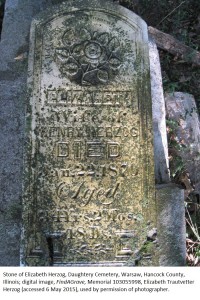 My attempts to locate Sophia (Derle) Trautvetter in the 1870 census have brought unexpected results: the location of the tombstone of her only daughter, Elizabeth.  An entry for her burial was located on FindAGrave and the image of her tombstone used in this has been done so with the permission of the photographer.

The cemetery in which Elizabeth (Trautvetter) Burke Herold is buried combined with the apparent fact that the tombstone was for a time buried itself (or difficult to find) were the two reasons her burial had not been previously located.

Elizabeth is buried in a small rural cemetery apparently near where she and her second husband were living at the time of her death. She is not buried in one of the other two cemeteries where her mother and three brothers are buried. She is apparently the only member of her or her husband’s family buried in the Daughtery Cemetery.

Elizabeth’s stone provided the date of her death and her age at death.

Calculating the date of birth for Elizabeth (Trautvetter) Burke 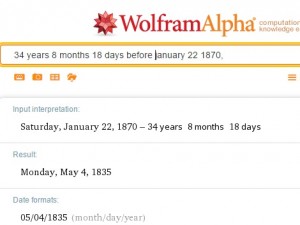 Herold was painless. I simply entered “34 years 8 months 18 days before January 22, 1870” into the search box at WolframAlpha and the date of birth was calculated for me.

This date, when entered into my genealogical database, should be entered as a calculated date. The tombstone should be used as the source for both the date of birth and the date of death.

As of this writing, I’ve not:

Elizabeth is not in the 1870 mortality schedule for the 1870 United States census because that schedule is not extant for Hancock County.