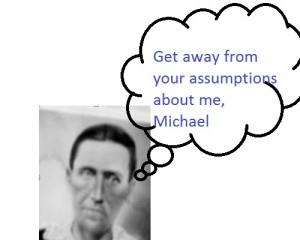 Posting about being unable to locate Sophia (Derle) Trautvetter in the 1870 census got me to thinking about some assumptions I’ve made about her and her family during that time period. It’s also caused me to realize that there are some gaps in how I have searched for her.

Sophia had four children who lived to adulthood. Two have been located as married men in 1870 and Sophia is not in their household or one reasonably close by.

Sophia’s daughter Elizabeth (Trautvetter) Burke Herzog died in January of 1870 and is buried in a small cemetery near Warsaw, Hancock County, Illinois. Elizabeth’s daughter and husband cannot be found in 1870 either. Both this daughter, Anna Herzog (born about 1868 in Illinois), and son-in-law, Henry Herzog (born about 1842 in Germany), were alive well past 1870. They have been located in 1880 living in Walker Township, Hancock County, Illinois. It is possible that Sophia Elizabeth is helping to raise or take care of Anna in 1870.

As mentioned in an earlier post, it’s also possible that Sophia and son Theodore returned to Germany with father George during the 1869-1870 era, only to return home again and not be in the United States in 1870.

And as some readers have pointed out, it’s possible that Sophia was ill, unable to take care of herself, and living in a poor farm, almshouse, etc. That still doesn’t explain the absence of Theodore from the census. However he is of an age to be inadvertently overlooked if working for a neighboring farmer as a hired man.

Even if Sophia were hospitalized, she should be in the census.

Another reasonable scenario is that she and son Theodore were moving at the time of the 1870 census and simply not enumerated. Sophia and her husband divested themselves of their real estate in 1869 and there are no deeds of acquisition for her after that year, so she may have been “floating” between her children during this point in time. That’s another option that could explain the absence of she and Theodore from the 1870 census.

Sometimes when you have been searching for someone for thirty years, it is easy to internalize things about them that are not necessarily true.