I first located this passenger list over twenty-five years ago when I knew quite a bit less about the family being researched and about research in general. Had I known more, I would have discovered more from the entry.

The family I originally located is at the bottom of this manifest page–George and Sophia Trautvetter and two of their children. I was on the ball enough to look at the next image to get the remaining children. The entry after the Trautvetters is for George’s niece and her family who are also from Sachsen and are headed to Cincinnati.

But I never looked at the rest of the manifest carefully. After all, I had the people of interest.  If I had read the entire manifest there was an entry that should have caught my eye. There’s another passenger from the Sachsen headed for Cincinnati. Actually there are two–a 19-year old and her apparent child.  In reading the entire manifest there are not many people that have that point of origin and point of destination. The couple warranted further research. 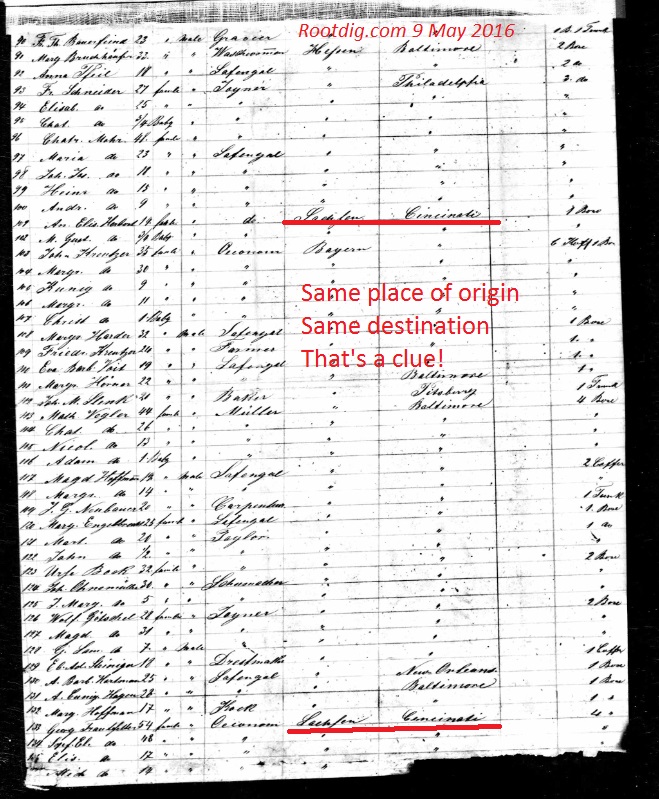 Anna Elizabeth Herbert and M. Gustave Herbert do have a relationship to the Trautvetters, although it is not given on the manifest. Anna is the Trautvetter’s oldest daughter, who had married before immigrating. Her husband immigrated also, just not at the same time as his wife and her family. Had I read the entire manifest and thought about what the names could be earlier, I would not have been looking for Anna as long as I had.

Being separated slightly on the list from her relatives is not cause for concern. It just serves as a reminder to always read the entire record.

This is also the only record located so far that provides a middle name for Gust. Herbert. In most United States record, he appears as Gustavus or some variant of that name.

At the bottom of the page are the Trautvetters. There’s no mention on the manifest of any relationship between the individuals. But manifests do not have to do that. Their goal is to record passengers, not document relationships between family members on the ship.

Cincinnati was a common destination for Germans during this time period. The Trautvetters did not stay in Ohio long. They arrived on 5 July 1853 in Baltimore and George was purchasing property in Hancock County, Illinois, later that same year.