There are two entries for Herbert C. Ufkes in the “Indiana, Death Certificates, 1899-2011” at Ancestry.com. He most assuredly died only once although I only have firsthand knowledge of his interment. (Note: Ufkes is referred to as “Uncle Herb” throughout this post. He was my Granddad Ufkes’ youngest brother.)

Ancestry.com apparently digitized the microfilmed copies of these records. They can’t be faulted for digitizing them twice if they were microfilmed twice by the agency that originally held the records.

The “record” entries for these same death certificates are not the same.  One has Uncle Herb dying in North Judson, Starke County, Indiana and the other has him dying in Illinois, Stark County, Indiana.

The first entry also has a period after his father’s middle initial and the second one does not.

The first entry has an initial after Uncle Herb’s middle initial and the second one does not.

The first entry has an initial after Uncle Herb’s wife’s middle initial and the second one does not.

That’s four differences in two extractions from the same record.

That’s a bigger concern than the duplicate image.

The duplication of images was not Ancestry.com‘s fault. They received duplicate copies of some records. 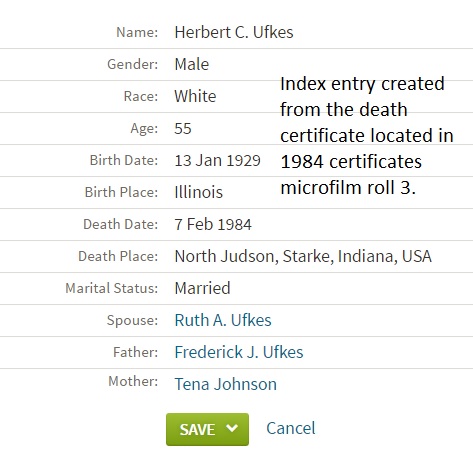 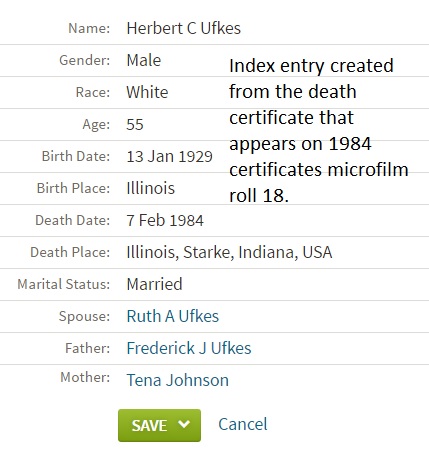 Uncle Herb was the first in his immediate family to die and was survived by his mother. There’s a story about how she was told and her reaction, but I’ll save that for another post.