Any record has the potential for error. Sometimes the reasons are easy to see and easy to understand. Other times they are not. Research is always strengthened when one remains open to the possibility of errors and how they could have taken place.

Dorothy (Habben) Ufkes’ 1940 census enumeration is a prime example, albeit a simple one. 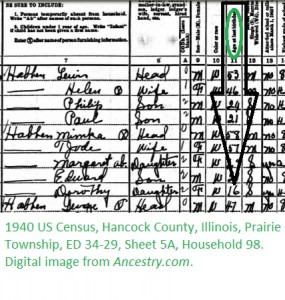 Dorothy was born on 12 April 1924 in Hancock County, Illinois’ Prairie Township. That’s where the census enumerator found her family on 18 April 1940. Typical for rural dwellers, there is no precise address given, but the family was residing on their farm on the “Habben Corner” a few miles west of Carthage, Illinois, on what is now Highway 136.

That’s probably why her father indicated she was 16 years old.

The amount of schooling completed is listed as “H-3,” three years of high school. That might seem incorrect for a girl who would have turned 16 in 1940. It’s correct.

Dorothy graduated high school in 1940. At some point in her elementary one-room schooling, she had been promoted more than one grade at a time. Her age is well-established with birth and other records and her high school graduation has been documented as well.

Sometimes what looks wrong is wrong.

Sometimes what looks wrong is right.

It’s up to us to figure it out.

It’s also up to us to transcribe the documents as they are written and include our analysis separately.