If I had a list of phrases I expect to rarely hear, “friendly partition suit” would certainly be one of those phrases. Partition suits generally result from real estate that heirs cannot decide how to “partition” fairly after the death of the owner. Death and money tend to not bring out the best in people.

But anything is possible and I should not conclude that the Quincy Daily Journal was being sarcastic when it referred this 1924 partition suit between the heirs of Bernard Dirks as being friendly.

There is not a special name 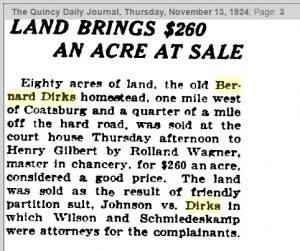 The case was an apparent necessity, largely for two reasons:

Dividing up eighty acres among twenty-two heirs is probably nearly impossible when all the heirs receive an equal share. These heirs did not which only compounded the problem. The various sizes of the estate were:

That’s going to be hard to accomplish with only eighty acres.

Actually that’s going to be virtually impossible to accomplish with eighty acres. That’s one reason why a partition suit needed to be brought.

The other issue was that some of the seventeen grandchildren who were heirs of Bernard Dirks were minors. They could not execute legal documents in their own right. Even if the heirs could have worked out some arrangement among themselves regarding the property (eg. another heir agreed to purchase the property at an agreed upon price), the minor heirs could not have executed any deeds to finalize that sale.

The partition suit was a legal necessity.

The newspaper did get one detail wrong: the case was actually Janssen versus Dirks (case file 5228 from the Adams County, Illinois, Circuit Court) and not Johnson versus Dirks.  A minor detail as Janssen frequently gets anglicized as Johnson.

The newspaper (and the court records themselves) left out another detail: what actually precipitated the case. Bernard Dirks died in 1913. His widow, Heipke, who lived on the farm after his death, died in 1924. She would have had the right to remain on the farm for the duration of her life. Her death was the actual catalyst for the case.

It’s always worth noting that court records frequently leave out the details we would like to know the most.

Like just how “friendly” the partition suit actually was.