It’s not her simply because it looks like it matches.

Looks are not always guarantees.

I was looking for the passenger list entry for Heipke (Mueller) Dirks, born in Etzel, Ostfriesland, Germany, in November of 1832. She could have immigrated to the United States as late as December of 1856  when she married fellow Etzel native Bernard Dirks in Adams County, Illinois. It’s possible that Bernard sent for Heipke after he settled in Illinois, but so far there’s no evidence of that or even a chronology that supports that theory.

It’s best that one avoid constructing romantic ancestral stories until there’s known details to support the development of those stories. It’s also best to stay on task and remember my goal: the passenger list.

Documenting the search process is an important part of making the case that I have located Heipke. My search of the passenger lists at Ancestry.com was conducted by searching “Immigration & Travel” database on 11 July 2016 for the following search terms: 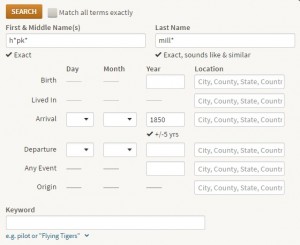 Of course there are others ways her name could have been read off a manifest or interpreted from the handwriting. Tracking my search process allows me (or others) to analyze my process.

There was only one real match (the others were generally Englishmen with the first name Hopkins).

The “Haipkens Miller” entry from the record transcription at Ancestry.com is shown below. 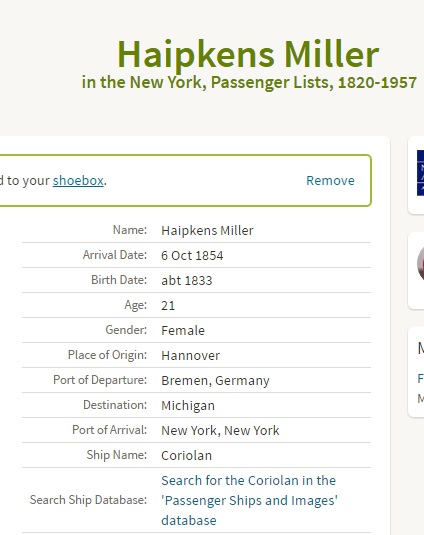 What is there is consistent with the known Heipke Mueller (Hannover is a common place of origin listed for Ostfriesian immigrants), except for the Michigan destination. Having studied numerous Ostfriesian immigrants during the mid-19th century, I knew that settlements in Michigan were somewhat atypical. There was no information about the known Heipke suggesting that she initially settled in Michigan

And it turns out that this immigrant did not settle in Michigan at all. Everyone around her was going to Michigan, but not Haipkens. Haipkens was going to Illinois.

That was consistent with my Heipke.

The last name of Miller was actually difficult to read on the manifest. With the exception of the initial “M,” it did look like Miller. There was even a “Miller” further down the page that could be used to help interpret the handwriting. This Miller was from Bavaria and not apparently related to Haipkens. While the first letter in Haipkens’ last name does not look like the “M” in the Miller entry, there is some similarity. It’s also the last name that makes the most sense.

The age of Heipkens is consistent with the known Heipke. Heipke Mueller was born in Etzel in November of 1832. In October of 1854, she would have still been twenty-one years of age.

Based upon the name (and how I searched), the age, the place of origin, the destination, and the consistency of the migration date with her marriage date, it seems that this is the same person.

But I don’t know that just because it’s the first hit that comes up.