I think I have found Bernard Dirks in the 1865 Illinois State Census.

“Think” is the operative word. 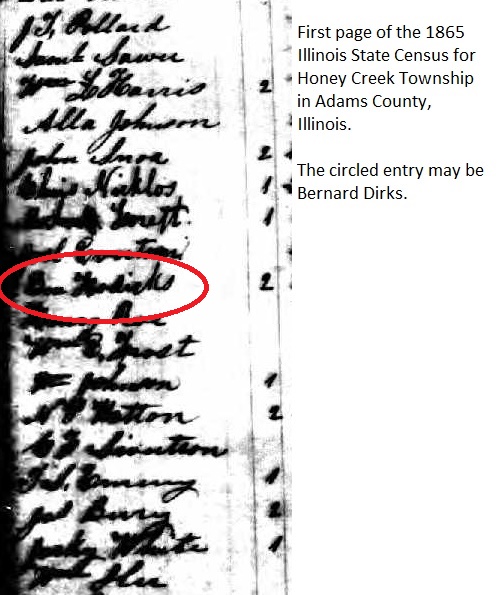 The handwriting looks like “Ben Henricks” and could easily be Ben Hinrichs or a similar name.

However, Bernard Dirks is in Honey Creek Township in 1860 and in 1870. While it’s possible he moved from Honey Creek Township and moved back, there’s no evidence that any such move was made. The family has been fairly exhaustively researched from the time of the Dirks’ marriage until their deaths in the early 20th century.

Part of my “proof” for demonstrating that this Ben Henricks is Bernard Dirks is looking at his neighbors in 1870 and comparing them to the men on this 1865 census.

The question is: how many of his neighbors in 1865 have to be his neighbors in 1870 for me to feel comfortable that I’ve made my case? How many households before and after his should I try and match between the 1870 nd 1865 census?