Not every immigrant stayed in their new country. That’s the apparent case with Gerd Behrens who arrived in the United States in 1858.

One scenario constructed from the known information is that both Gerd and Trientje returned to Germany because they were unhappy in America. Then after Gerd’s death, Trientje returned. That’s one scenario. Trientje has not been located on a return manifest entering the United States between June of 1867 and her 1880 census enumeration. Trientje would have been  seventy-three years old when her husband died.

The other possible scenario is that Gerd returned to Germany by himself, either for a visit or permanently. Just because he died in Ludwigsdof/Weene does not mean that Trientje was there at his side. I also really can’t say if he was “happy” in the United States or not.

One has to stick with what the records say and the scenarios supported by the records.

What’s missing at this point is the 1870 census. An organized search for Trientje in 1870 needs to be conducted. This search should include the concomitant spelling variations for Behrens (and there are many) using various online census indexes. A manual search should be conducted in Clayton Township and nearby locations as she most likely is living near the area where her children settled. The 1870 census enumerations for all her known children should be referenced to see if she is living with one of them under a name spelling that eludes database searches. She may not be living with one of them in 1870, but their entries should be searched just the same. 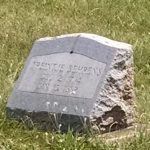 I should continue trying to search for Trientje in passenger list databases for the 1867-1880 time period, documenting my search parameters and search process. During these searches I will remind myself that Trientje did not necessarily immigrate.

The death entry for Gerd is from a compiled ortssippenbuch for Weene. It is possible that actual church records make some mention of Trientje.

At this point, I cannot say whether Trientje went back or not. All I know is the bulleted information above that indicates Gerd did go back.