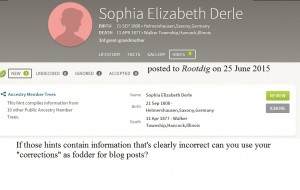 Can you use “errors” in the trees as fodder for blog posts? Note: this screen shot was used for an example and is not implying there are trees with incorrect data on Sophia Elizabeth (Derle) Trautvetter.

Last week I gave a webinar on creating genealogical blog content. As regular readers know, I’m not a big fan of memes, writing prompts, and similar content creation processes. That’s great that it works for some, but it’s not for me. It’s just not how I operate. I feel the best blog posts come from actually doing research, thinking about that research and the records that have been found, and analyzing the information one has located.

Probably one of the best ideas for generating blog content came to me today. Of course, that was after the webinar was over.

For a variety of reasons, I’ve virtually stopped trying to submit corrections to those who have incorrect information on members of my family in their online “trees.” It feels like a losing battle. By “correct” I’m not talking about situations where two researchers may reach different conclusions from the same set of records. I’m talking about a tree compiler who has dreamed up that a relative of mine who lived his entire life in one county and appears on a tree as having actually been born four states away. Or an ancestor who is born in northern Ireland, comes to Canada, returns to western Ireland to marry, appears in eastern Ireland for a census and then migrates again to the United States–with no discussion of why these records are on the same man (who has one of the most common Irish last names there is).  Or those trees where someone is born before his mother is born. Examples about.

The egregious errors are what really concerns me–at least inititally. Keeping on top of all the corrections borders on an exercise in futility. I’m not the genealogy police and I don’t feel that it’s my job to correct all the obvious errors that I encounter. I don’t go around in old published genealogies tearing out pages that are riddled with errors–although I have been tempted.

But the errors are a concern and simply ignoring them isn’t an option. My ancestors deserve to have their story told as correctly as possible.

So I’ve decided that creating blog posts summarizing the correct information might be a good idea. Blog posts with sources for the “right date,” “right name of spouse,” “right place of birth,” etc. I realize that genealogical conclusions are subject to revision if new sources become available. Most of the truly frustrating errors are not because there’s “new” information hidden in an archives. Most of the truly frustrating errors are ones where the laws of time, space, and biology have been ignored. I’ve decided that blogging about what is “right” is one way to get the correct information out there.  I’m well aware that many of those who have the erroneous trees will never see my postings or will choose not to modify their tree.

Online publication may not be permanent and has limitations, but one has to start somewhere.