The 1880-era homestead claim for Cornelia Albers in Dawson County, Nebraska discussed in “An Affidavit Shows Residence and Connections” was an incomplete one. Cornelia and her grandmother Antje, to whom Cornelia assigned her claim, never completed it.

Consequently it did not generate an actual patent and the claim was incomplete. Incomplete applications are at the National Archives, but they are not in the land patent index at the Bureau of Land Management website because that site only indexes completed applications that generated a patent.

How did I find the unindexed patent for Albers?

I initially did not find it because I was looking for it specifically.

I knew my relative Focke Goldenstein had completed a homestead in township 11 North 25 West in Dawson County, Nebraska. I had his homestead papers. Looking at the tract books would let me know who also had claims (incomplete and complete) in the same area he did.

Focke was listed in section 12 of township 11-25. Turns out a relative of his, Schwantje Sievers, was also listed. Also listed was Eime (actually Ehme) Fresenberg who testified in Goldenstein’s homestead claim. 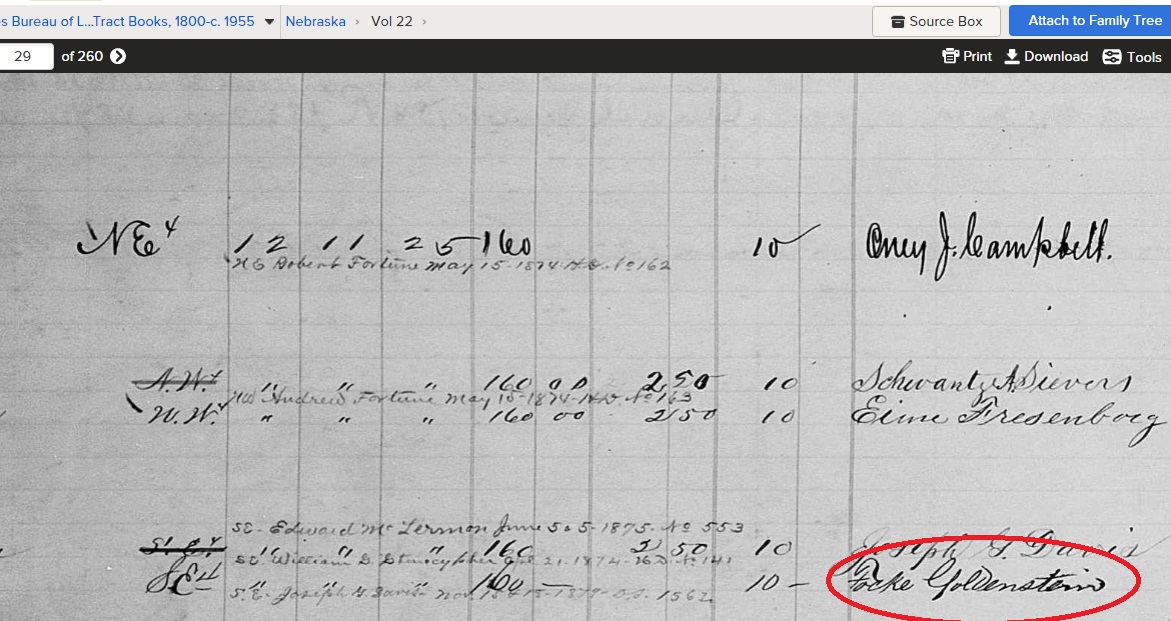 I decided to “browse the entries” for nearby sections in the same area to see if there were any names I recognized.

Sure enough, in section 14 were two entries for names I recognized–Antje and Cornelia Albers. Both of their claims were cancelled and both were relatives of Goldenstein. There was no patent issued because the claim was never complete, but there should be a file for the paperwork they did complete. Their entry in the tract book means that they at least started the homestead application process. The books were kept so that two people did not have “in process” claims for the same piece of property.

Because people tended to settle in groups, it’s advised to look at the tract books for that location where someone did complete their homestead claim. It’s a good way to find neighbors who may have initially settled in the area but, for one reason or another, failed to complete their claim. Some will contain minimal paperwork–the paying of the fee to register their claim and that’s it. Immigrants would have to document their citizenship status. And if there was a contest regarding the claim, as there was in Cornelia’s case, that will be in the file as well.

The records were at the National Archives. Now that I look, I need to obtain Antje’s file as well.

An index for claims for Nebraska are on the Nebraska State Historical Society website and are searchable. For other states, the “neighbor” approach using the BLM tract books is necessary.

My webinar discusses how to use the BLM site and the tract books.