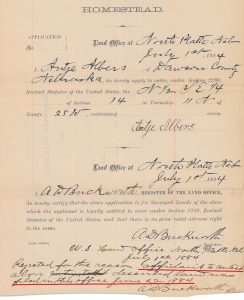 On 1 July 1884, Antje Albers went to the land office in North Platte, Nebraska to file a claim on the north 1/2 of the south east 1/4 of section 14 in township 11 north range 25 west. It was the same property her granddaughter had initially filed a claim to in 1883.

A. D. Buckworth, Register of the Land Office, did “certify that the above application is for Surveyed Lands of the class to which the applicant is legally entitled to enter under Section 2289, Revised Statutes of the United States, and that there is no prior adverse right to the same.”

That “certification” was part of the form.

There’s no times given on any part of that document, but apparently later that same day Buckworth wrote the following annotation on the bottom of Antje’s claim:

Why Buckworth took her application in the first place is another question.