The executor of the estate of Barbara Haase claimed that he could not determine to whom Barbara was referrign in her 1902 will when she gave $250 to Kate “Trauthfeter.”

It was her granddaughter and executor Herman Haase’s niece. According to the final order approved by a Hancock County court and filed for record on 1 March 1906 “Kate Trautfeter” was actually Fena Katherine Trautvetter and that she was “generally known as and usually called Kate Trautvetter.” 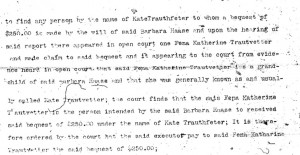 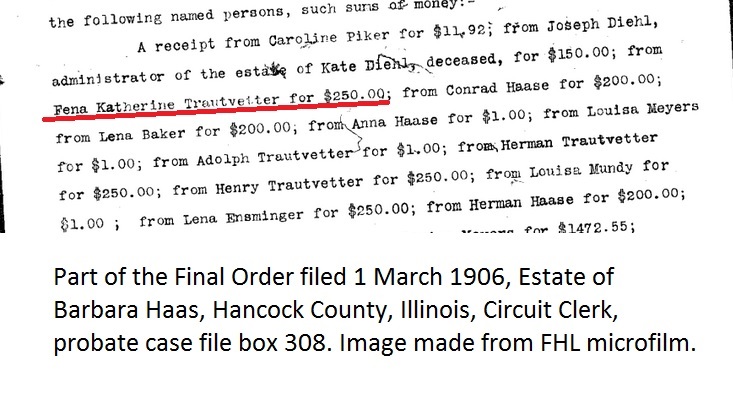 Katherine Trautvetter was my grandmother Ida (Trautvetter) Neill’s aunt (Ida’s father was Katherine’s brother George). When I located this record I was already informally aware of grandma’s Trautvetter aunts and uncles. The name Katherine or Kate did not strike any chords with me. Grandma never referred to this aunt as Aunt Kate or Aunt Katherine and when I read the complete file I realized that this was the aunt to whom Grandma referred to as Aunt  Phennie.  So apparently the name Kate or Katherine was used less frequently after a certain point in time.

My lack of awareness of the name was understandable. All these people died before I was born.

But Herman Haase–why didn’t he know his niece’s name? Kate was the only legatee whom he indicated he could not find–the other Trautvetters he knew were his nephews and nieces. Why not Kate/Katherine/Adolphina?

That story hinges on some speculation and some documentable evidence and is one we’ll save for a future blog post.

The lessons here are that: