“Next time, the people will let Mr. Sledd slide.”

February of 1861 saw the United States on the cusp of the Civil War and apparently Nelson Sledd was “misrepresenting” the intentions of the citizens of Nicholas County, Kentucky–at least according to the Paris [Kentucky] Citizen as quoted in the Greencastle [Indiana] Banner in February of 1861 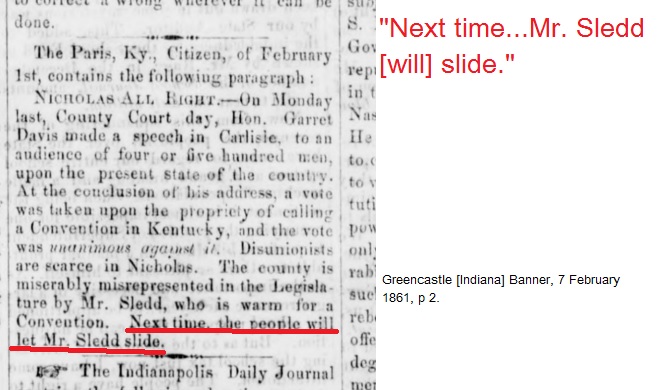 Nicholas All Right.—On Monday last, County Court Day, Hon. Garret Davis made a speech in Carlisle, to an audience of four or five hundred men, upon the present state of the country. At the conclusion of his address, a vote was taken upon the propriety of calling a Convention in Kentucky, and the vote was unanimous against it. Disunionists are scarce in Nicholas. The county is miserably misrepresented in the Legislature by Mr. Sledd, who is warm for a Convention. Net time, the people will let Mr. Sledd slide.

Aside from containing some interesting opinion regarding Nelson Sledd, the article reminds us that every newspaper account needs to be analyzed in context and there may be terms with which the reader is unfamiliar.

What was the political philosophy of this newspaper? Could that have impacted its reporting? Clearly part of this article is opinion and part of it is (hopefully) fact. The newspaper’s political viewpoint impacts how items are reported.

Unfamiliar terms may also be used. I am inferring that “disunionists” supported secession from the United States. I’m also inferring that the convention reference is to one that would also support seceding from the Union as well.

In a future post, we’ll see some evidence of Sledd’s voting record.

It’s also good to know that writers in 1861 had a sense of humor. One has to smile at “let Sledd slide.”