The writing is that of the clerks. It’s clearly written in two different hands as the script at the bottom is distinct from the writing on the top. It is difficult from the image shown here to determine if the “73” at the very top was written by one of the two individuals who wrote elsewhere on the wrapper.

And I’m not really certain that it matters.

The number on the top of the packet is not a unique number that identifies this case. It is a reference to the file box in which the packet was originally stored and was used in the index book (not shown here) to facilitate the finding of the case files. The packet of loose papers was wrapped in this cover sheet and stored in metal box 73.

At least they were at first.

Now when one views the actual papers at the courthouse in Carthage, there is not just a box 73. There is a box numbered with 73/74 and the packets are intermingled. While I’m not certain exactly what happened, I do have an idea. A new courthouse was built around the turn of the 20th century and this included a new vault for the records. That vault had bigger boxes than the original courthouse. In order to make better use of space, the old boxes were combined–two old boxes were put into one new physical box. Consequently all the probate case file boxes before the remodel actually have records from two original boxes in them. And since people have been using the records for over one hundred years, the packets have become intermingled in the boxes. They are that way in the boxes and they were filmed that way by the Genealogical Society of Utah (and that’s how they appear in Ancestry.com‘s digital images of these records as well).

The only date on the cover is one in 1881 when the estate was finally settled.

Ancestry.com indexed the case for it’s probate materials collection (note that this collection is not complete and that there are limitations to using the index). Usually when Ancestry.com created an index entry for these packets, they used the cover sheet to make the index entry. 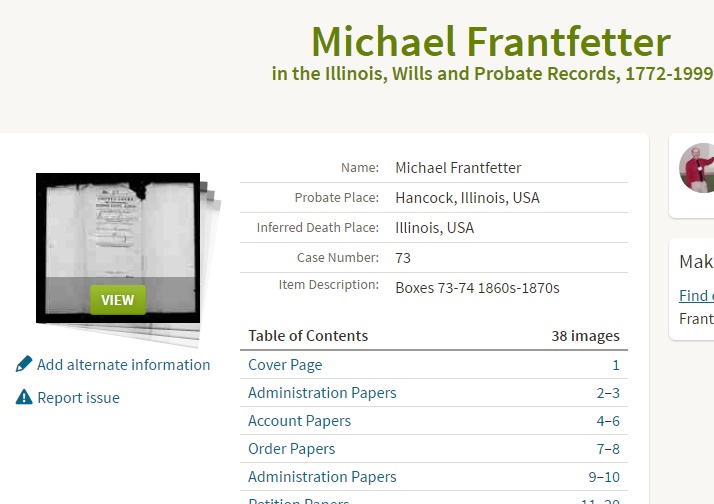 The last name was reasonably read as Frantvetter.

There no date of probate listed for this entry (dates are listed for some others) even though there was a date on the bottom of the cover. The inferred death place may or may not be correct. I would not use it as the place of death unless there was a specific statement contained within the probate as to where Michael died. The item description has a range of dates but those are estimated based upon the papers in the packets contained on the roll of microfilm.

The probate materials for this county (like many of the probate images at Ancestry.com) are online digitally at FamilySearch.  FamilySearch often has images of the original indexes maintained by the local records offices. Those indexes are not linked to the actual images.