Family tradition says that Anna Goldenstein spent a considerable fortune trying to determine how her son Henry died in a Kansas City hotel room in July of 1921. Anna was not the first person to fight to find out what happened to a deceased child and she will not be the last.

That does not make the letter she wrote to the Adams County, Illinois, Coroner in September of 1921 any less sad. Anna had paid for autopsies for her son after his body had been returned to Golden, Illinois, for burial in a grave next to his father and brother. There would be three separate autopsies on Henry in an attempt to determine whether he died from a gunshot wound to the head or was killed by blunt force trauma.

In this letter Anna asked for justice for her son from the Adams County Coroner because authorities in Kansas City did not seem interested. One cannot say for certain why that was the case, but it may very well have been that Goldenstein was just another out-of-town farm boy who had met an ill fate in the city. Writing it off as a suicide made it easier to close the case. 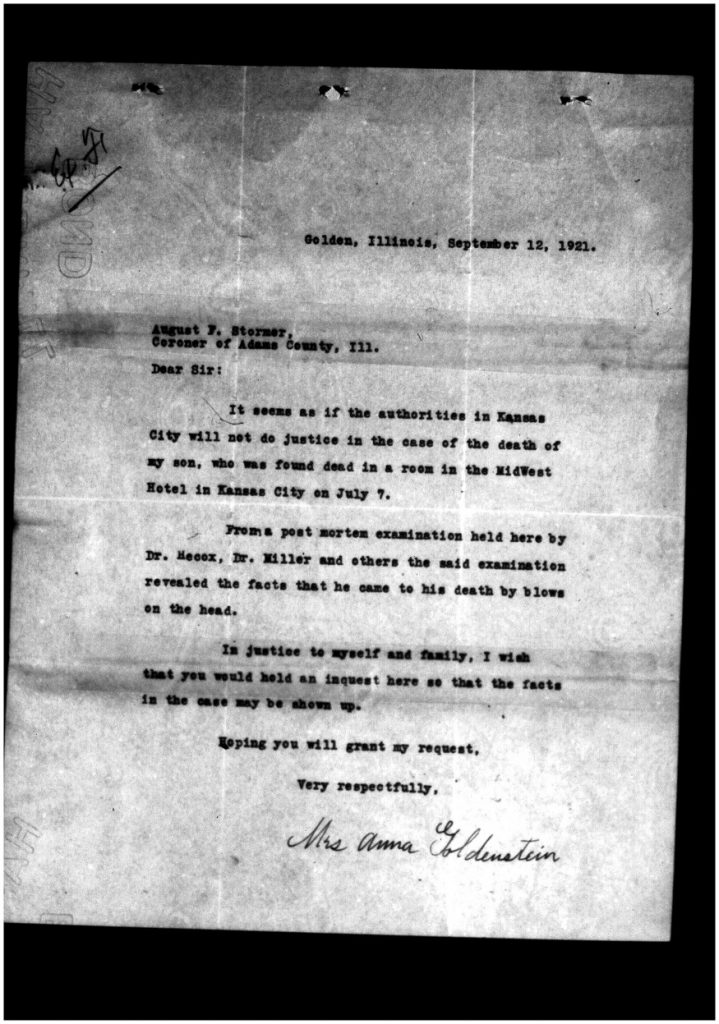 Family tradition did not say if anyone was found to be guilty in the death of Henry Goldenstein. I’m inclined to think that no one was or there would have been mention of it.

The coroner’s inquest references correspondence with authorities in Kansas City and the Missouri State Attorney General. We’re working on obtaining additional details and will post an update when there’s something to be said.

Burying a deceased child who comes home in a coffin due to an unexplained death is never easy. Anna is not the first grieving parent to want justice.

Note: Anna Goldenstein is my great-great-grandmother.