One did not always just leave Europe and head off to America without paperwork, particularly as the 19th century wore on.  In some locations, in some time periods, it was necessary to secure some permission or documentation in order to leave the old country. One simply did not leave home, head to port, get on a boat and leave. Sometimes these records have been preserved and in some cases they have been microfilmed by the Family History Library.

Searching for them in the card catalog generally requires looking at jurisdictional levels larger than the town or the county of origin. That’s how that I located records for Ostfriesland, Germany, referred to in the catalog as “Auswanderungskonsenses.” The records are described as covering from 1842 through 1913,but they are more complete as time moved forward. Not every Ostfriesian completed this process. Of my nearly forty immigrant ancestors, one appears in this record. Of the even larger number of aunts and uncles who immigrated, only two more appear. 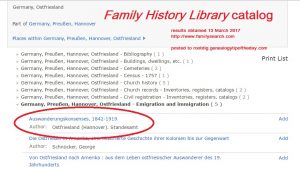 Not every jurisdiction has these records. I had hoped to find something similar in the card catalog for villages in Thuringen where I also have family. There were no such records.

Not every jurisdiction has these records of emigrants, but one never knows until one looks. It may be that the records exist but have never been microfilmed.

The file for my ancestor Focke Goldenstein in the Auswanderungskonsenses contains a letter from his father. Focke was 16 when he immigrated and the letter references his age. The 1870 era letter is being translated and we will have an update when that’s been completed.