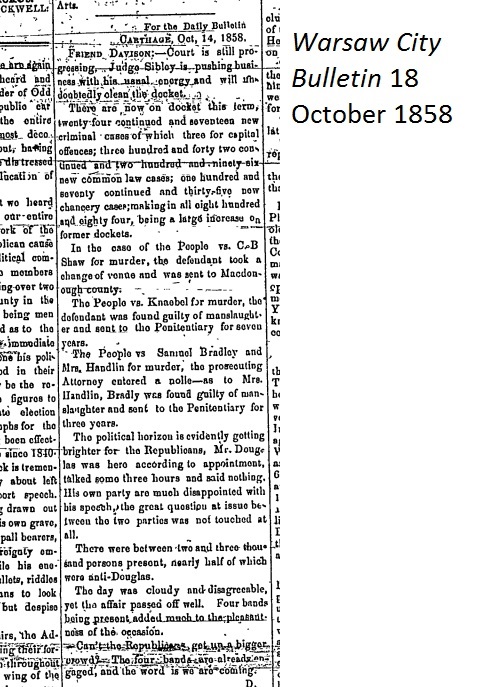 There were three capital cases in the Hancock County, Illinois, court in October of 1858. One I was searching for, but the newspaper mentioned three:

The last one intrigued me because of the female defendant, but I’m trying to stay focused.

The Knaebel case is of personal interest as the victim was originally in the Warsaw, Illinois, tavern of Barbara (Siefert) Bieger, where he got drunk. The resulting fight got him removed from her tavern where he proceeded to become involved in an altercation with Knaebel who lived in a dwelling attached to Barbara’s tavern.

Knaebel was later pardoned by the Illinois Governor. The newspaper mentions the efficiency with which the judge was going to clear the docket–I wonder if that’s part of what eventually lead to Knaebel’s pardon before his sentence was up.

I was hoping to find a reference to the case or the pardon in the newspapers from Warsaw that are available in digital form. The microfilm is admittedly hard to read and the digital images are as well, particularly for the time frame of this murder. This reference was not located by searching for Knaeble’s name–it was found by searching for the word “murder” in newspapers from 1858. My searching for items has moved away from names during this time period and gone to keywords such as “murder,” “manslaughter,” etc. One is challenged when the images are difficult to machine read as these were.

They were meting out efficient justice in Hancock County in 1858. And I still can’t believe there were three open capital cases on the court docket.