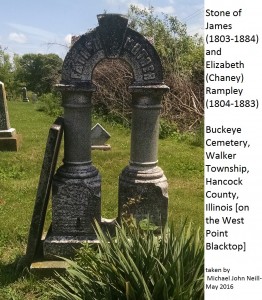 James Rampley was born in 1803 in Harford County, Maryland, and died in 1884 in Hancock County, Illinois. He married Elizabeth Chaney in Coshocton County, Ohio, in 1830. Some clues and lessons I learned from researching James:

My ancestor table can be viewed on my site. James is my 3rd great-grandfather.