I have hundreds of cousin matches on AncestryDNA. I’m not yet certain how many I will eventually try and contact.

Given my family structure and precluding any “surprises,” I probably knew the second cousins personally or at least knew who they were even if we have never met. My experience is based upon my own family and may not be representative of the experiences of others.

I only have three first cousins and did not expect that they had taken the test. That meant that these first six matches (assuming they were actually second cousins or closer) were descendants of one or more of great-grandparents.

Of my first four matches, the identity of the first two were known by me simply by their username. They were first cousins of my mother (on her paternal side) and are half-siblings of each other.  This makes them first cousins once removed to me (consistent with the range given by the AncestryDNA results). They took the test mainly for reasons of ethnic curiosity. I did not contact them via the messaging on AncestryDNA because I knew who they were and am already friends with one on Facebook.

I contacted the third match via the messaging on AncestryDNA. She is a first cousin of my mother (maternal side) and was someone of whom I was aware. I’m not certain how interested she is in genealogy, but she did respond within twenty-four hours to my request. She would be my first cousin once removed.

The fourth match was for a first cousin of my father (on his mother’s side) with a test administered by his wife. Based upon the username and the pedigree I was able to determine who this person was. Since we are already in contact, I did not see a reason to contact again. He would be my first cousin once removed. 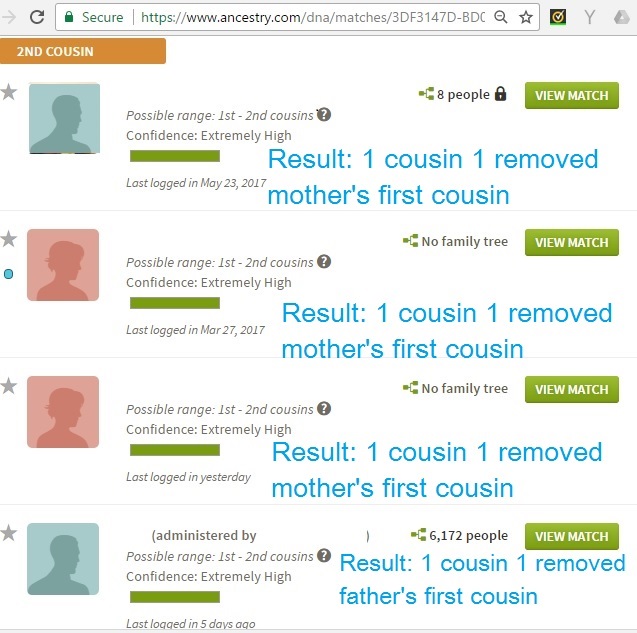 The fifth match was from a test administered by the daughter of the donor. She responded within twenty-four hours to my email telling me who she was. The donor is a first cousin to my mother (maternal side) and would be my first cousin once removed.

The sixth match was from a test of someone with whom I am in communication already. In fact, her mother was somewhat involved in genealogy years ago. The grandmother of this match is a sister to my paternal grandmother. This makes her my second cousin.

I really did not expect the AncestryDNA relationship determinations to be incorrect. In this case, the responses may have been quicker given that I already knew some of these people and that we are fairy closely related.

It is important to remember that people take AncestryDNA  for different reasons. Some want to simply determine their ethnic ancestry and others interested in their genealogy. It is worth noting that some who are interested in their genealogy have a passing interest. Some are rabidly obsessed. That partially impacts the speed with which one gets a response as do non-genealogy commitments that many people have.

We will continue posting about my experiences with AncestryDNA.

Your experience may vary. Stay tuned.