It’s rare for one newspaper clipping to suggest as many 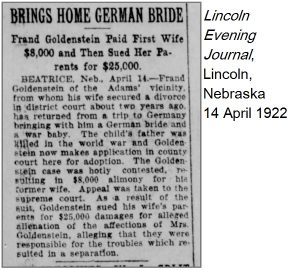 records as this one does. But given all the claims this article makes, validating those claims with other records is advised.

The Lincoln Evening Journal of 14 April 1922 (available in digital format on Newspapers.com) contains “news” on Frank Goldenstein (styled “Frand”), indicating that he had recently returned home to Nebraska from Germany where he had married a German woman who had a child with a man who had been killed in the first World War. The article goes on to reference Goldenstein’s divorce from a previous wife and the legal difficulties that followed.

There are a variety of records suggested by this little article, including:

There are a few lessons here as well:

This Frank Goldenstein is a member of my extended Goldenstein family and a first cousin to my great-grandmother, Tjode (Goldenstein) Habben (1882-1954).