The local paper contained a brief discussion of the death of Henry Goldenstein along with an obituary for him written by the local Lutheran minister. The hope had been that the local paper would include details that were not included in the article about Henry’s death that were published in the Quincy, Illinois, newspaper. 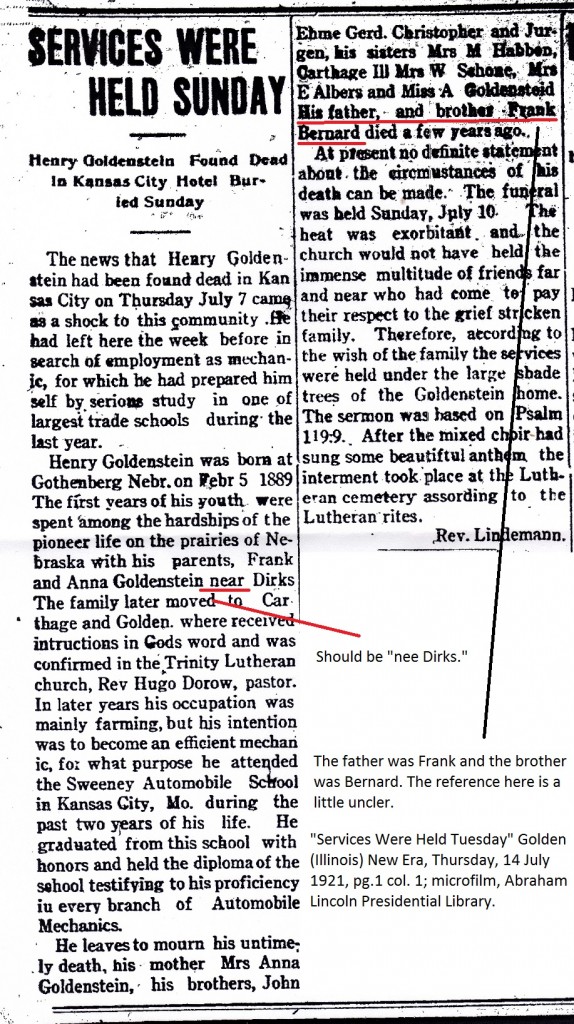 We won’t transcribe the entire item here, but there are a few key things to note.

There are two noticeable typographical errors in the article. These are noted in the image. The first error related to the use of the word “near” when mentioning Henry’s mother maiden name. The more confusing error involved the reference to Henry’s father and brother who died before him. “His father, and brother Frank Bernard died a few years ago” is somewhat confusing. The reference should have indicated his father was Frank and his brother was Bernard. These easily noticed errors make one wonder if there may be factual errors in the article as well. The Bible text is also not clear either.

From a grammar standpoint (particularly the dearth of commas), the section of the obituary discussing the survivors is not entirely clear and could be interpreted in more than one way. The brothers were:

The reference to Henry’s death and the reaction is similar content to what appeared in the initial article in the newspaper from Quincy, Illinois. This article does include the name of the automobile school Goldenstein had attended.

The article indicated that the funeral was held outside at the Goldenstein farm instead of at the church where the Goldensteins were members. Whether this was actually because of the heat or was actually due to the nature of Goldenstein’s death is not clear. My grandmother (Henry’s niece born three years after his death) only indicated to me that the funeral for her uncle was held outside because of the heat. Given when when my grandmother was born (1924), her knowledge of that information was second hand.

Not all newspapers are created equally.