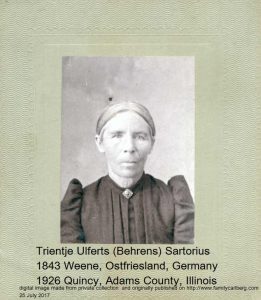 I had forgotten this picture even existed.

The undated picture is of Trientje (Behrens) Sartorius who was born in Weene, Ostfriesland, Germany and died in 1926 in Quincy, Adams County, Illinois. Ulferts was her “middle” name in a sense. It was not a middle name in the way that people typically think of them. It actually was a patronym based on the name of her father, Ulfert Behrens.

Trientje came to the United States as a child with her parents, married Hinrich Sartorius, and raised her family on a farm near Golden, Adams County, Illinois. After their children were grown, she and Hinrich spent some time in Quincy after they retired, which is where she died. She and Hinrich are buried in Golden.

This picture is in the possession of one of Trientje’s numerous descendants. She and Hinrich had eleven children, nine of whom left descendants of their own. Trientje, later anclicized to Tena, was passed down as name to several of Trientje’s descendants, including my great-grandmother Trientje (Janssen) Ufkes. Trientje was named for her own grandmother, Trientje Ulferts (Claassen).

Trientje’s adult children died over quite time span–from 1913 until 1979. As a child I can remember my mother telling me that my great-grandmother still had an aunt living. At the time my great-grandmother seemed ancient (she was in her early eighties and I was not quite a teenager) and the thought she had an aunt by birth still living seemed nearly impossible to me. It wasn’t.

Records on the children of ancestors may contain information on their parents. The death of Trientje’s daughter over fifty years after her own death serves to remind us that those records may have been created half a century or more after our actual person of interest died. And those later records could contain significantly more detail.

And you should always reach out to your distant kinfolk. They may have pictures that you do not.