Note: This blog post will be corrected any known errors in fact are located or brought to my attention. Our discussion here is an attempt to be elementary in the explanation.

AncestryDNA finally gave me some of the infamous “circles” on my results page. The circles are an attempt to group together DNA submissions who appear to be a part of the same family group. The AncestryDNA Circles contain individuals who are DNA matches to each other (or to several others in the group) and who have shared ancestors in their trees indicating a relationship that is consistent with the estimated cousinship based upon their submitted DNA.

You have to match on some DNA with some of the people in the circle and you have to have shared ancestors in your tree. People who are DNA matches and do not have a “tree” will not appear in any circles.

I’m in eight circles as of this writing:

AncestryDNA refers to the circles as being in “beta” and that my circles are in process. I’m assuming that is why I’m not in circles for the spouses of some of these ancestors. I’m also assuming that this is why I’m not appearing yet in circles for other ancestors that I know have other descendants in the AncestryDNA database with trees attached to their submissions.

The Circles are an attempt to help users of AncestryDNA discover relatives in their database by relieving them of some of the work of searching. It also allows them to find individuals who may be relatives and with whom they share no DNA. The further back the common ancestor the higher than probability that you share no DNA. 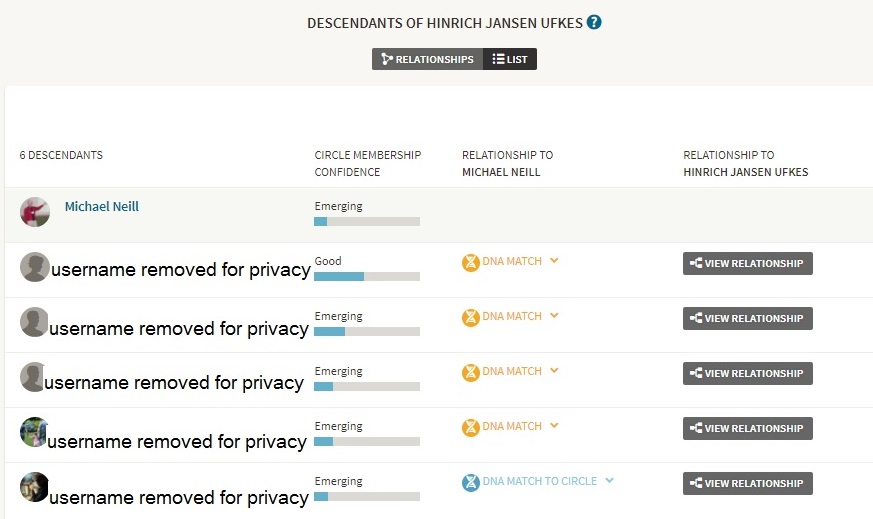 Two of my relatively close Ufkes cousins (also descends of Hinrich) are not in this circle. That’s because they have not submitted trees as a part of their AncestryDNA account. They do appear on my DNA matches as the three of us all descend from Fred Ufkes (born 1893) who is a grandson of Hinrich. Only including people with trees (which may change) does not seem to present any significant advantages to me at this point.

At this point, I’m not certain how I personally will use the circles as the circles I’m in are not for any ancestor who has any, for lack of a better phrase, research challenges. I’ll be interested to see if I appear in circles for other ancestors–particularly ones who have been more difficult to research.

At this point, I’m also not certain how (from my standpoint) the circles are any different from searching submitted trees for matching ancestors–except that search process for those trees is automated and DNA matches are initially how people are connected. Admittedly AncestryDNA is referring to the circles as still being in beta.

Your experience with using the circles may vary. We will have a followup post explaining the matches in more detail. Names have been removed for privacy.