I’m in eight circles on AncestryDNA as of this writing:

While the AncestryDNA circles are still in beta mode, I’m a little bit curious. 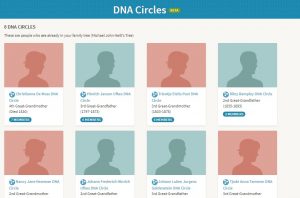 I’m not in a circle for the husband Christianna (DeMoss) Rampley or the wife of Johann Friederichs Hinrichs Ufkes.

I am hoping this is because the results are in beta mode and that the circles for these people have not yet been compiled.

But will I be told if there’s a circle for Christianna’s husband or Johann’s wife and that I’m not in it?

Because I think to get in a circle at AncestryDNA, one has to be a DNA match for someone first and then their trees are compared to see if there’s a shared ancestor. It is a two-step process, beginning with the DNA match. I realize that once the ancestor is a significantly back in the lineage I may share no DNA with them and they may still be my ancestor. There is a difference between paper ancestors who appear in my tree and DNA ancestors with whom I share DNA–especially after one gets back beyond the third great-grandparents or so.

So if I’m not a DNA match for the “circle” of one of the ancestors on my tree will I get a notification?

And if I’m not in the circle how worried should I be?

It partially depends upon how far back the connection is. That’s the best answer I have at this point.

Note: I do match with known descendants of all my great-great-grandparents who have tested with AncestryDNA as follows: