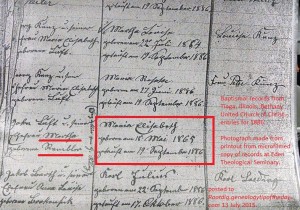 . In this record, the situation has been reversed.

In 1886, two children of George and Maria (Luft) Kunz were to be baptized at the church in Tioga, Hancock County, Illinois. Today this congregation, which was heavily populated by German immigrant, is affiliated with the United Church of Christ. Earlier the congregation was affiliated with a synod of the Lutheran church.

Like other records I have discovered, this item was a happenstance. I was not looking for it.Four generations of my Trautvetter family (from Sophia [Derle] Trautvetter down to her great-granddaughter, Ida [Trautvetter] Neill–my grandmother) attended this church.  I was searching the records for various members of that family.

Searching non-English records requires me to be painstakingly slow-slower than I usually am when things are difficult to read. The names John and Martha Luft (her name is underlined in the image) jumped out at me. Martha (Rampley) Luft was my aunt-the sister of my great-great-grandfather Riley Rampley. But what on earth were they doing as parents for a baptismal entry in this church?

And was that even Rampley as her last name?

I knew John and Martha (Rampley) Luft had a daughter Marie born in 1865. Why was she being baptized in 1886?

When I read the two entries before hers, it made sense. Maria (Luft) Kunz’s daughters, Martha and Maria, were being baptized on the same day. It made perfect sense.

Most likely Marie/Marie (Luft) Kunz had not been baptized as a child. Her mother, Martha (Rampley) Kunz came from a different religious tradition–one that did not practice infant baptism.

And the pastor baptized her as an adult.

And spelled her mother’s maiden name of Rampley they way it sounded to him: Rambleu (or something very similar). The very English name was likely unfamiliar to him.