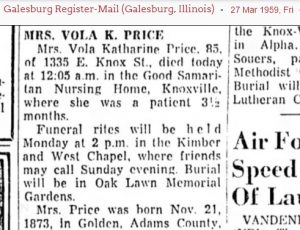 We all have those families that we have not researched as well as others. Families that for one reason or another do not require nor demand as much of our research time.

The siblings of my Fredericka (Sartorius) Janssen (1865-1913) falls into that category. Like many of my Ostfriesen families, the villages of birth in Germany for the parents were already well-established and I concentrated on locating new information on her ancestry and not her siblings and their families. Others had compiled that information, I had no reason to doubt it, and decided to focus my genealogy time on families that were more confusing and where I had more questions.

Then I came across this obituary for one of Fredericka’s younger sisters, Vola (Sartorius) Price. I knew she had lived in Galesburg, Illinois, for a while but was not certain when. And as soon as I saw the obituary, I remembered something that apparently was buried in my head over thirty years ago where it must have buried itself deeper and deeper over time. My great-grandmother Tena (Janssen) Ufkes (daughter of Fredericka) had corresponded with a daughter of Vola.  That daughter lived in Galesburg when she and my great-grandmother were in their late eighties. The daughter, whose name I cannot remember, was nearly blind at the time and corresponded with what struck me as the largest handwriting I had ever seen. I’m not certain why those details stuck with me, but they were apparently easier to remember than the daughter’s name.

Then I read the place of burial.

I have driven by it on my way to work every day since April of 1997.

Admittedly Galesburg is not far from where I grew up. I only live about eighty miles from where I’m “from,” but it still struck me that I had been by that cemetery over 3,000 times and had never realized it was the final resting place of my aunt.

The serendipity probably is not a lesson of this little discovery.

But I was reminded that sometimes there are things stuck in the depths of our memory until something jars them out. I had not thought of the letters from the nearly blind cousin in over thirty years.